I think everyone(?) gets them. They’re those nasty yellow stains in the underarms of white shirts. Well, faced with throwing out three different white v-neck t-shirts, I decided to see if there was something I could do about it.

I remembered seeing a post floating around a month or so back about how to get stains out of clothes so I did a quick search and found this:

Ah ha! With a little Dawn, hydrogen peroxide and baking soda, I should be able to get them out. Yay!

So I tried it on this shirt: 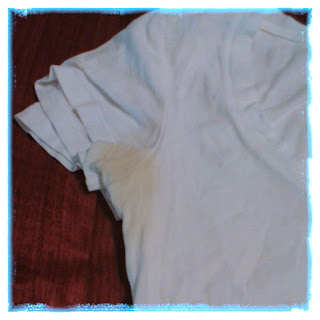 That picture has a funky border on it, but no filter. It really is that yellow and gross. 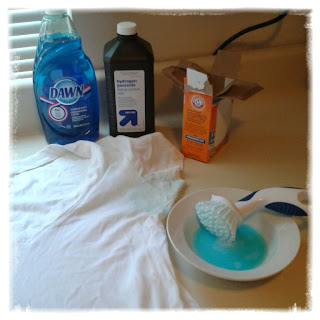 The recipe called for two parts Dawn to one part hydrogen peroxide, plus “some” baking soda so I just sprinkled it on as I scrubbed. I probably used about half a tablespoon on each arm. Then I let it sit for an hour as described and threw it in the wash on hot with a bunch of other whites. I didn’t use bleach this time though because on another website I read that bleach can make this type of stain worse.

And here is the result. TOTALLY WOW. Excuse the blurry picture, but you can see that the stain is gone! 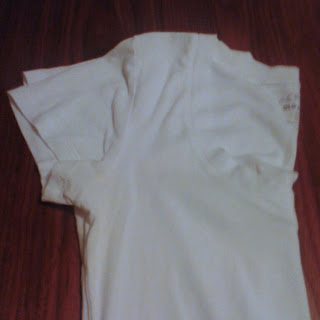 Let’s look at them side-by-side.

I did try another recipe that omitted the Dawn on another t-shirt that I bought exactly the same time as this one and had exactly the same type of stain. It worked, but it wasn’t the amazing transformation that this recipe effected. There was still the hint of a stain so I went back and used the same mixture on the other t-shirt and it worked just as well as it did on this one.

Now I don’t have to buy new shirts for a while. That means I can buy this instead.