There are days when you hit eight thrift stores and find nothing worth the time and effort. And then there are days like today.

I was feeling a little meh about going anywhere today. It was hot, we were expecting a storm to roll through at some point and after two days of baking dog treats for Hampton Bay Days and then an event in Warrenton last night, I was pretty tired.

Sadly, my husband’s work schedule has been wonky the last few weeks and today was going to be his only day off so I didn’t want to waste it puttering around the house. When he suggested we hit a couple of thrift stores, I wasn’t that excited, but I went along.

Since I’d already been to Yesterday’s Rose in Fairfax, the Fairfax Goodwill and the Humane Society Thrift Store earlier this week, we decided to make the trek out to Annandale to the Salvation Army there. I’d never been except to drop stuff off so I didn’t know what to expect (and truthfully didn’t expect much). Then I saw this: 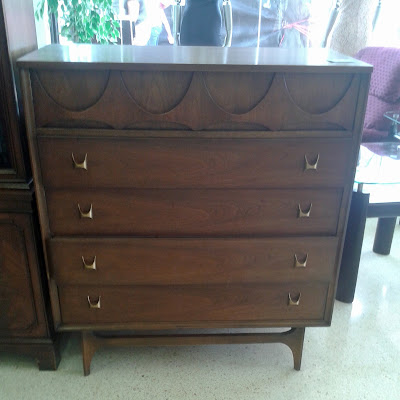 Honestly, I pretty much started to hyperventilate. The Salvation Army greeter must have thought I was going to fall over and die or something. When I was done having my conniption, I explained that this piece is a Broyhill Brasilia dresser. It was made in 1962 in North Carolina back when North Carolina still actually made furniture and didn’t just ship it in from China. This is also arguably one of the most desirable American-made lines from the mid century period. And it was sitting on the floor of a random Salvation Army store in Annandale, priced extra-low. The greeter was flabbergasted and told me he thought it was interesting, but that some kid whose mom was redoing his room had turned it down earlier in the day. Thought it was weird looking. His loss is my gain!

People, this thing has dovetailed drawers and runners. It has built-in drawer dividers. It is in pristine condition. The drawers stick a bit, but it’s nothing a little paste wax won’t fix. Look, you can barely get an IKEA dresser for that price. The ubiquitous MALM is $149. This dresser is gorgeous. I’m in love.

Oh, and I also bought this: 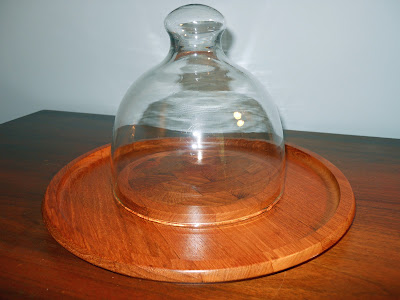 You can go get that on Etsy, if you’re interested. It’s a very nice cheese board designed in Denmark. Clearly from the 1960s. Just the glass dome alone is well worth the price.

I’m keeping the dresser though.