I have a confession to make.

Once, in college, I insisted on making a chocolate hazelnut flourless chocolate cake twice in one night because the first one hadn’t turned out as well as I’d wished. I think that’s the moment my friends discovered that I am, as they say, not right. Though, that was sophomore year so  probably I flatter myself that it took that long. 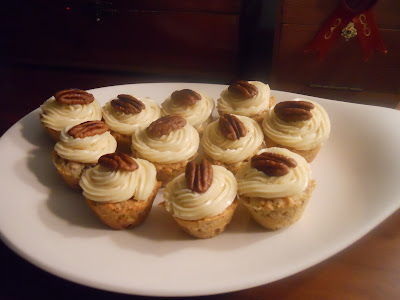 Take these butter pecan mini cupcakes. I made this recipe three times in one week. Yep. The first time, I just wanted dessert and I had all the ingredients for this recipe, found on Pinterest, and it looked pretty easy so I just threw them together.

And they were fine, if a bit chunky. The problem was, the original recipe called for chopped pecans, which might have been alright in a full-size cupcake, but in a mini cupcake, I just felt like I was eating a frosted muffin. A lumpy, frosted muffin with very sweet frosting that because of the high concentration of butter in the batter, left big melty holes in the cupcake. You can even see them in the picture on the site at the link above. Good, but not great. I liked the flavor combination though so I decided to mess around with it.

So, the second time I made the recipe, I decided to grind the pecans, turning it into a sort of pecan flour. I knew they would be drier because of the additional “flour” so I took out one tablespoon of the all-purpose flour. Plus I cut back on the maple syrup in the frosting and added a splash of whiskey. Still, not quite right.

But, I had friends coming over and luckily one of them is a trained pastry chef so I knew I could solicit his sage advice. The problem was that now the cupcakes were okay, but too dry and if I took out any more flour, I was going to have to start messing with the baking powder amount and I really wasn’t keen. So my genius friend suggested adding a tablespoon of brown sugar. See, there’s a reason sugar is considered a “liquid” in baking even when it most patently, obviously, isn’t a liquid. Sugar holds onto moisture in a way that flour doesn’t, especially brown sugar, so when he suggested it, I thought it had an excellent chance of working out. 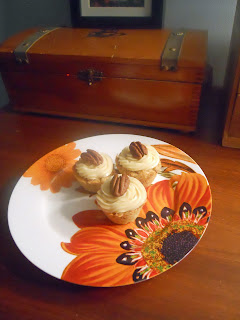 And…ding ding ding! Last night I made them again for a church function and they were universally admired. Seriously, make these. Everyone will think you got them at a fancy cupcake store, but they’re so easy.

2. Cream the butter, sugar and brown sugar until fluffy. Add the eggs and beat until smooth. Add the vanilla and stir. Combine the flour, salt, baking powder and ground pecans and whisk to combine. Add the flour mixture to the sugar mixture and beat to combine.

3. Fill the wells of the mini muffin tin with one tablespoon each of batter. Bake for about 11-12 minutes or until a wooden skewer comes out clean. Let the cupcakes cool for about 2 minutes and then remove to a wire rack to continue cooling until completely cool.

4. While the cupcakes are baking, combine all the frosting ingredients and beat until fluffy. Remember, if you elect to make these adult cupcakes, take out a tablespoon of the maple syrup.

5. Frost cupcakes using a piping bag fitted with a star tip once cakes are completely cool and top with a whole pecan.