I have a lot to catch up on from the Thanksgiving weekend away! I hope all had a lovely one.

We drove down to visit my husband’s parents and grandmother in the Tidewater region of Virginia and had a very nice time. So did Chester, who got presents from grandma, Care-A-Lot Pet Supply in Newport News and Three Dog Bakery in Richmond.

On the way back, we decided to take our time and stop at pretty much every Goodwill we saw, which was quite a few given that we drove home via Route 1 instead of I-95. I also bought a few things in Fairfax before we left so I have quite a haul here! 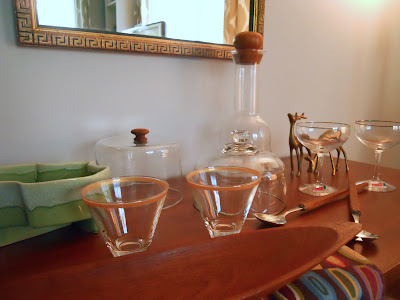 There’s a lot of stuff here so I’ll run it down item by item. 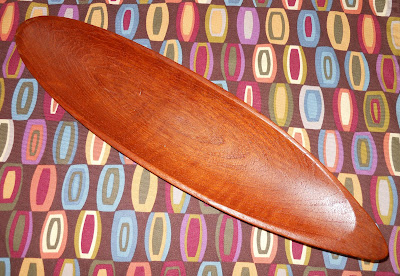 This long, narrow bowl is by Anri Form, apparently an Italian company that still exists today, though they now make more wooden tourist figurines than pretty, high quality serving pieces like this one. This is about 16″ long, so a good size for a small baguette. It has a little metal button on the bottom with the maker’s mark, a nice detail, so even though I’d never heard of the company when I picked it up, I figured it was something pretty nifty. 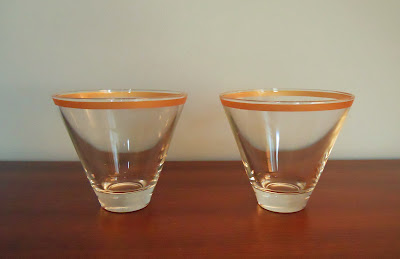 Tis the season for consuming adult beverages. Like whiskey. These glasses caught my eye because of the gold rim and unique shape. No idea who made them, but they’re a sweet pair. 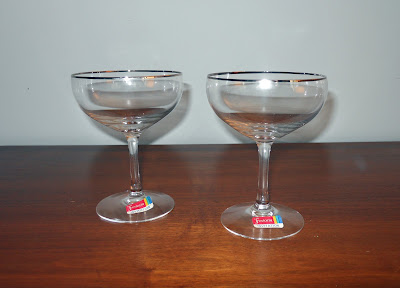 Or perhaps champagne is more your speed? These would make cute toasting glasses for a vintage-minded bride and groom. They’re from Fostoria, a fairly well-known crystal company. They even have their original label. I’m loving the platinum rim, but all my barware is all gold so these will be for a lucky someone else. 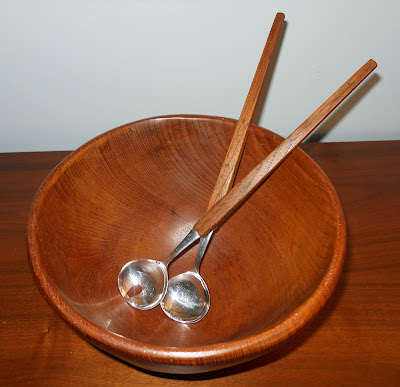 After the turkey-fest this weekend, some of us are probably craving salad. I’ve listed these salad serving utensils, but I’ve been staring at this picture and Doug and I usually use some boring old kitchen tongs to serve salad so now that I think about it, I may de-list them. So if you want them, better act fast. 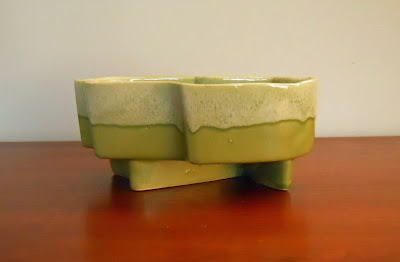 I’m new at mid century pottery since I’ve always been more of a furniture girl, but I knew this was obviously something special when I saw it on a shelf in Hampton. The shape and the foot are so unique! It was made by California Pottery, probably in the 1960s. The mark on the bottom says CP 508 USA so it was pretty easy to figure out who did it. I’ve also seen this piece online in pink, but personally I like the green better. It was super dirty inside since it is, after all, a planter, but I scrubbed it and it came clean. It has a couple small chips, but it’s still not a bad looking piece. 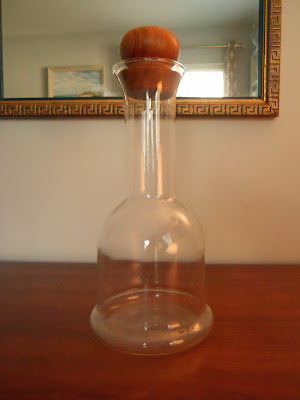 I was lucky enough to come across this Dansk wine carafe in Fairfax before we left. I didn’t see it on my first pass through the store, but it caught my eye from across the room while I was waiting in line with the teak tray above. I’m pretty sure either one of my aunts or my parents had one of these while I was growing up. I seem to recall it being filled with water or orange juice most of the time. Dansk advertising from the 1970s calls it a wine carafe though and who am I to argue with them? 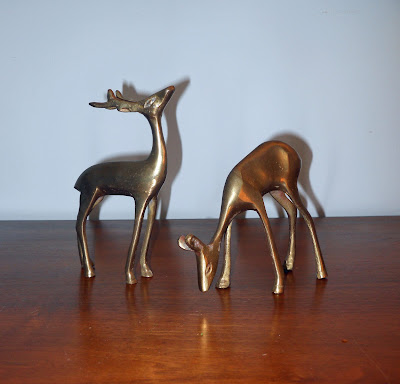 The last thing I found down in Hampton was a pair of brass deer. Everyone and their brother is selling these or a similar pair on Etsy these days (must be holiday fever), but I found them cheap so mine are priced pretty low. If I were more of a Christmas decorator I might have kept them, but they deserve a mantle and we haven’t got one!

The final thing pictured is a couple of glass domes. I found these a few weeks ago thinking that I might just hold onto them for when I find cheese board that are missing their domes (which happens fairly often), but I figured, why hoard them? If I find a board for them, I’ll re-list them, but in the meantime, someone else might be having the same problem that I was preemptively trying to solve.