Let me be clear: I’m not normally one to go in for rappers. Over the years the only rap that has ever gotten significant play in my house has been Gil Scott-Heron at one end of the spectrum and MC Hammer on the other. So Macklemore? Not my usual fare.

However, I had heard Thrift Shop (NSFW due to filthy language link goes to Youtube) on the radio a few days before Young House Love posted their recent Completely Unofficial Macklemore Thrift Shop Challenge and, um, I kinda liked it. The idea was to #1. take $20 to the thrift shop (like it says in the song), #2. spend that $20 any way you like and photograph the spoils, and #3. find an item mentioned in the song and snap a pic.
Well, you’ve gotta know I was all for that. So we headed out over the weekend with our $20 to a couple of thrift stores in Alexandria that I don’t make it to all that often. And, sadly, found nothing.

But I was not deterred! I decided to make the rounds of a few Fairfax/Annandale favorites later in the week and behold: 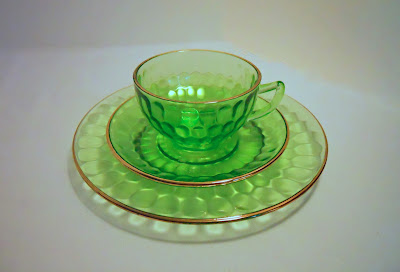 I’d never understood the fascination with Depression glass, frankly. I know a lot of people love and collect it, but even when I was in my Art Deco phase, I didn’t really care for it. But when I happened upon these pieces at the Salvation Army in Annandale, I knew I had to have them. They look so Anthropologie, don’t they? The gold rims are what make it for me. I got six sets for my $20.

And here’s the kicker: this is actually uranium glass made in the 1920s or maybe early 1930s. How do I know? They glow under black light: 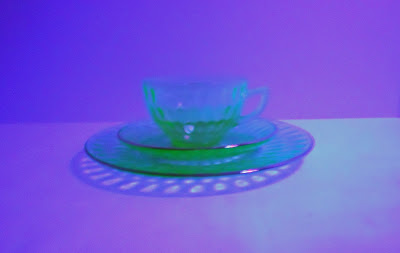 Awesome, right? So I may not have exactly followed the rules of the challenge because I forgot to bring my camera to the store (and, um, didn’t get my entry in on time), but glowing dishes totally make up for that, don’t they?