Let’s go to the movies! Let’s go see the stars!

Or perhaps just sit in some antique theater seats and pretend we’re at Radio City. 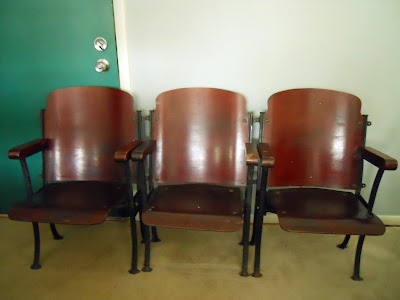 But let’s back up a bit. Last Monday I was feeling a little restless. I think I’d been cooped up inside too long what with the snowy weather last week. So even though I usually save my Western Fairfax County route for Tuesdays or Thursdays when The Closet and Bargain Loft are open, I’d just done my mid-county route on Saturday so doing that tour again didn’t seem like that would be a good use of my time.

At any rate, off I went to Chantilly and Herndon with stops at Treasure Hound in Chantilly, Habitat for Humanity and a planned stop at a new place I hadn’t checked out before, but I never made it there. At first I didn’t find much…until I walked to the back of the Herndon Goodwill, a place I almost never go because it’s rare that I find anything at that particular store. 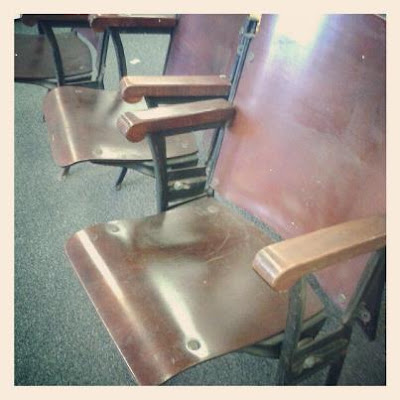 And tada! Three antique theater seats. I’d have to guess from the design and the several visible coats of paint that these are probably from the 1920s or 30s. The finish reminds me a lot of the radio I am currently turning into a bar (sorry for the lack of updates on that, but it hasn’t been warm enough to open the windows for painting).

After futzing around a little deciding if I should buy them and calling Doug to see if he’d support the purchase, into my little Yaris they went (after paying for them, of course).

Initially I hoped I might be able to keep one or even two of them, but I got them home and set up in the living room and realized that not only do they not work, they really, really don’t work. One piece from the 1930s (my radio turned bar) is a cool older piece mixed in with my “newer” mid century modern pieces. Two older pieces just looks like I haven’t finished redecorating. Plus, with one leaf in our enormous dining table, it just doesn’t physically fit.

But that’s okay! Instead of keeping them, I got to apply my restoration skills to them and clean them up a bit.

I opted not to refinish or paint. I think these qualify as industrial style pieces and the charm of things that have been used in a commercial or industrial setting is the history behind them. I don’t know what the specific history of these chairs is since they don’t have any identifying markings on them, I know they’ve got one.

However, there’s a difference between charmingly industrial and grody. Gum under the seats? Grody. Some dings and scratches? Charming. Dust in the seat mechanism making them a little sticky to pull down? Grody. Wear to the stain on the arms? Charming. See what I mean?

Plus, I what I don’t want is for something to leave my hands in the exact same crumbling shape that I found it in. So first I cleaned them and then I’ll be finishing them with some shellac.

What that all adds up to is this process:

1. Dust and wipe down with white vinegar on a rag to see what we’ve got going on under there.
2. White vinegar and chisel off the grody old gum (while wearing gloves cuz YUCK). If you have an actual chisel, that would have been better than this putty knife I used.
3. Apply half/half mix of mineral oil and mineral spirits using 0000 steel wool and lint free rags to clean off surface grime.
4. Two coats of shellac to seal up the wood. Let dry 24 hours in between coats.
5. I used paste wax to put a clear seal on the metal legs.

Both shellac and wax are easily reversible finishes so if I sell these and the next owner prefers a more spiffed up look, it’s not going to be as difficult as if I, say, sprayed polyurethane on them, which is basically like spraying plastic and fairly hard to remove. The reason I am using shellac here is that shellac can sit on top of just about any finish and not crack.*

I’ve talked about the cleaning process I use in this entry about the Broyhill Brasilia dresser we have in the office, but I’ve haven’t yet covered the actual finishing process. But, a la Young House Love, this process took two days (three if you count the acquisition itself) so I’ll give you two entries on the subject. Tune in for a post on finishing soon!

* For those who might actually be engaging in a decision-making process about what finish to use on a cleaned antique, here is some more about that process. I’m reasonably certain the finish on these seats is lacquer because the other period options would have been too time-consuming and expensive on a theater full of seats. I can’t use lacquer here because lacquer dries too quickly when brushed on and I don’t have a spray booth as a sometime hobbyist restorer. I also debated using tung oil. That would probably be fine on the underside of the seats where the original finish looks like just stain over bare wood or is so degraded that it’s basically gone. However, tung oil is a different kind of finish than lacquer and needs to penetrate the wood, which it can’t do if there’s lacquer on top of the wood surface. On the chair backs, which retain some of their finish, it might fill the gaps where the original finish is worn away, but it might also just sit on top of the lacquer and make everything sticky. If I use shellac, which is the same kind of finish as lacquer (i.e. it uses a solvent, though a different one–denatured alcohol as opposed to turpentine), it will sit on top of the lacquer, dry nicely, not make things sticky and it will protect what’s left of the original finish. For the record, if you are finishing a new piece of wood or an antique that has been stripped, none of this information applies. This is just for antiques that you don’t want to strip, sand, and refinish. Done.