I went out thrifting with a friend on Saturday. We found a Milo Baughman lounge chair upholstered in blue velvet for her and we found this for me: 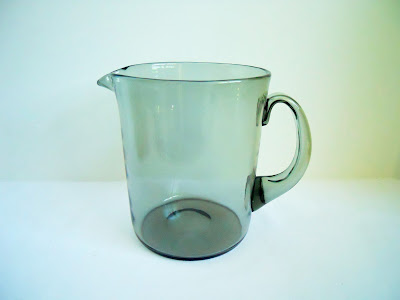 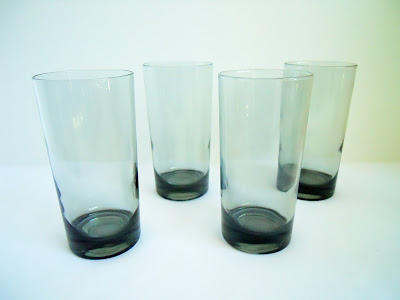 Though I found them on the same day, now that I’ve seen them in sunlight, I’m not actually sure that they match despite the fact that they’re both smokey gray glass and they’ve both got polished pontils, indicating they’re both hand-blown. The glasses are a more true gray and the pitcher is a bit greenish, I think. 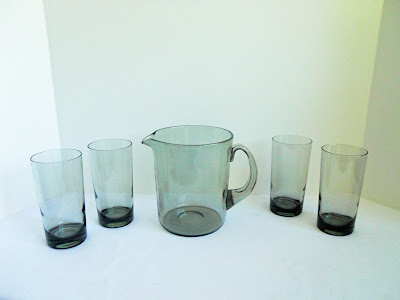 That said, they’re still quite nice together. I’m having visions of summer raspberry lemonade.

Thanks to Modish, I’m pretty sure the tumblers are Old Morgantown, which is utterly ubiquitous around here. In fact, last week I found some blue wine glasses that were even marked Morgantown. 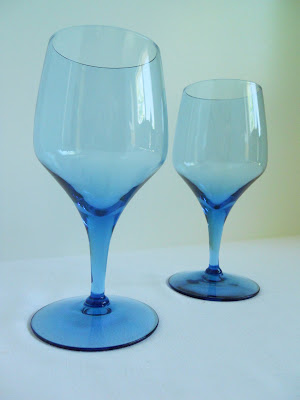 The company was in West Virginia so I’m not surprised that I see suspected Morgantown pieces quite frequently. But the pitcher isn’t Morgantown.

Via eBay and Etsy, I discovered that the pitcher was likely either Orrefors or Holmegaard. I had guessed maybe Holmegaard when I bought it because it’s not dissimilar in color to the little Holmegaard glass dishes I listed this weekend and those are marked. 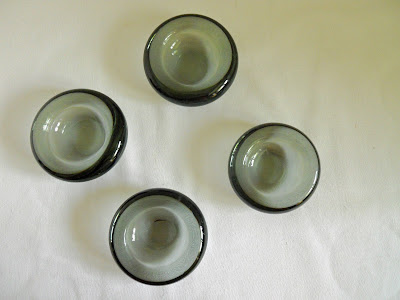 However, my search revealed two photos at Replacements, one labeled Orrefors and one labeled Holmegaard.

Let’s look at mine again, cropped closer to resemble the other pictures:

So here’s what I think: I think this is Orrefors. There’s a slight curve to the inner part of the handle where the Holmegaard pitcher is more vertical. And the way the bottom of the handle is attached to the body of the pitcher is also more vertical than on the Orrefors pitcher, which seems to be at a very slight angle.

What do you think? Holmegaard or Orrefors? Orrefors or Holmegaard? Or how about something else entirely? Surprise me!