We are skulking in shadows no more!

When I visited the Decorating Outlet earlier in the month, I had been hoping to find lighting for both the office makeover and the dining room. And while I ended up having to order the pendant for the dining room, I was able to obtain the office lighting I wanted. 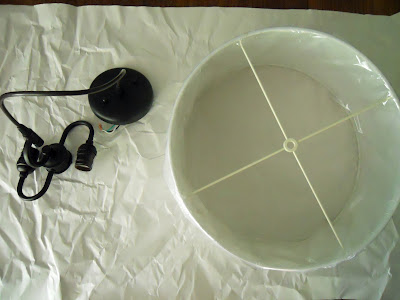 I picked up the shade conversion kit for just $25 (instead of the usual $50) and the shade was dented so I got that for a bargain $5. But since the kit was discounted because the cord was short (and I would need to shorten it still further) and the shade was going to be recovered because it’s more cream than white, I feel like I got a pretty awesome deal.
To remind you, this was what the office lighting looked like before: 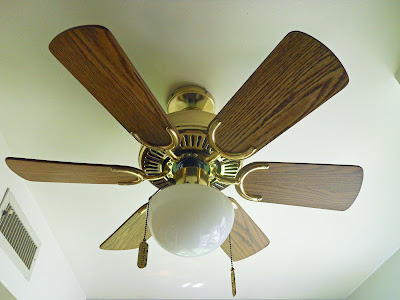 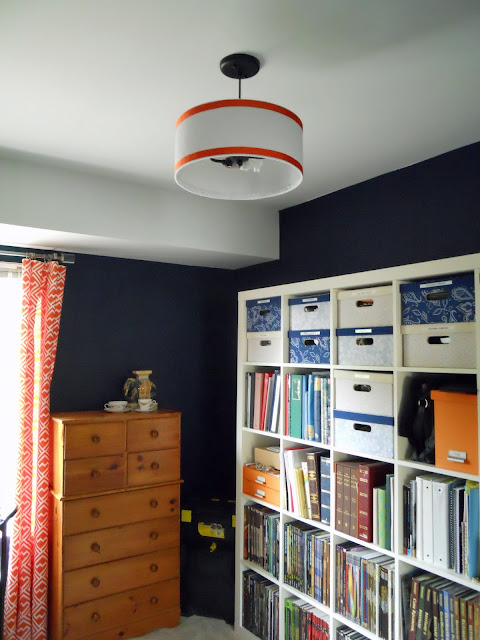 However, it took a few steps to get from here: 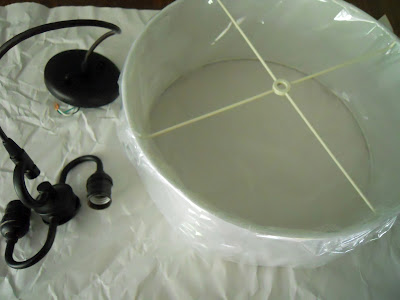 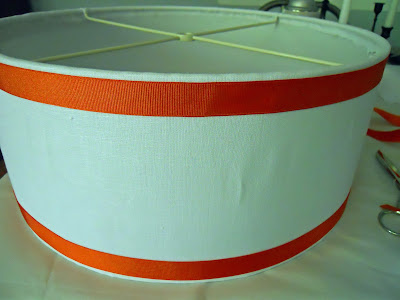 The first thing I did was iron the fabric (a remnant from Joann’s at $2.33) and the ribbon (four yards from Fabric.com at $1.98 with my 10% off coupon). I didn’t take a picture, but since I was using a lightweight linen fabric, ironing was a very important step if I didn’t want the final product to be hopelessly wrinkled. 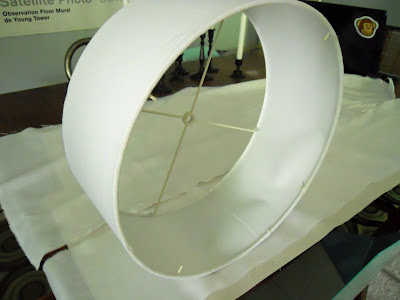 I didn’t measure so much as lay the fabric out flat and roll it from one end to the other starting at the seam of the original cover to get the exact length I would need (plus one inch to fold over and use as a seam). Working in much the same fashion, I cut the fabric as I rolled it to get the right height, leaving an inch or so on the top and bottom.
I had read several tutorials online that mentioned problems with the type of glue used, but the linked one there also mentioned that she was using silk ribbon and that a sturdier ribbon like grosgrain, which was what I had chosen, might have been different. So I chose to work with hot glue because I thought it would be both sturdy and easy to control, giving me time to work with the warm glue if I needed to adjust the ribbon. Nevertheless, I wanted to test it and happily, grosgrain was different. I cannot see the glue through the ribbon at all, even with the light on. 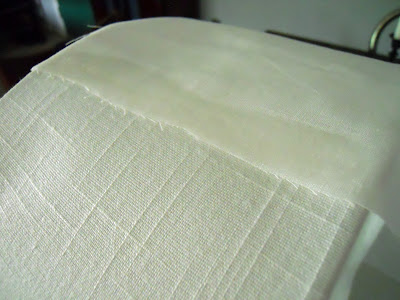 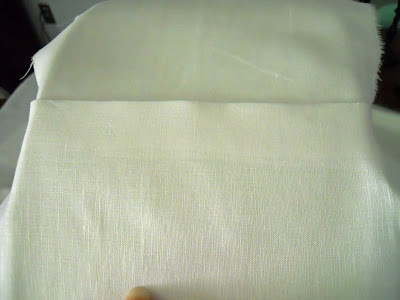 As a repositionable adhesive, the Easy Tack was perfect to hold the fabric in place while I rolled the shade around, but I would not have wanted to leave it as a permanent solution because I was concerned that any heat from the lightbulb might make it give way over time. Hence double-gluing with the hot glue. 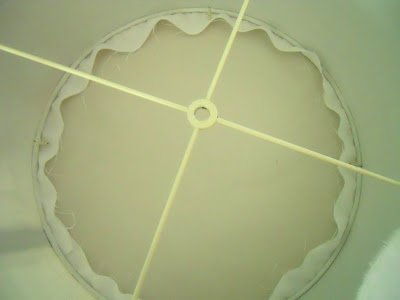 With the fabric secure to the shade, I turned it so I could get to work on securing the bottom and top. The little pegs for the diffuser (which I have on order but hasn’t gotten here yet) were going to be in the way of folding the fabric, but I knew I wanted to work in sections anyway so I just snipped where the pegs are on the bottom and where the cross bars are at the top. 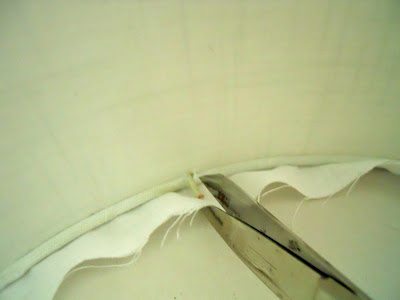 The next step was to start gluing. 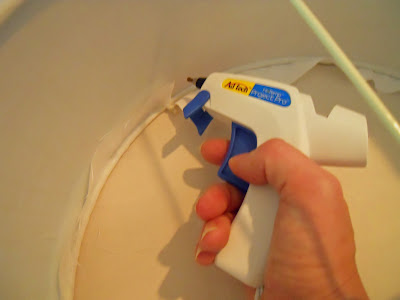 I applied the glue right along the the bottom of the shade, one section at a time, stopping after each section to press the fabric into the glue. I had to go back and apply more glue a couple of times, but for the most part it worked pretty well. 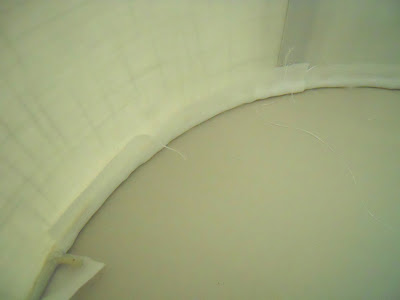 Once I gave the glue some time to set, I went back and trimmed the excess fabric. I don’t really recommend this method because I found it very difficult to trim a nice straight edge even with sharp scissors. For me, it didn’t much matter because I will be using a diffuser so you won’t be able to see it at all once that is up, but if you’re working with a regular lampshade on a regular lamp, you might want to measure only the additional half inch that you will need to secure fabric to the shade. 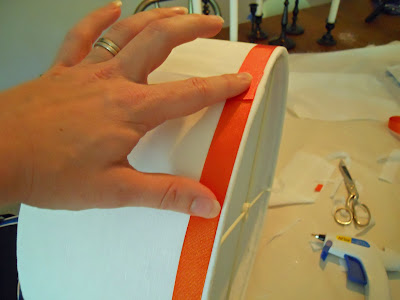 Next I rolled the ribbon around the shade, leaving just an additional half inch to fold under to create a nice seam. 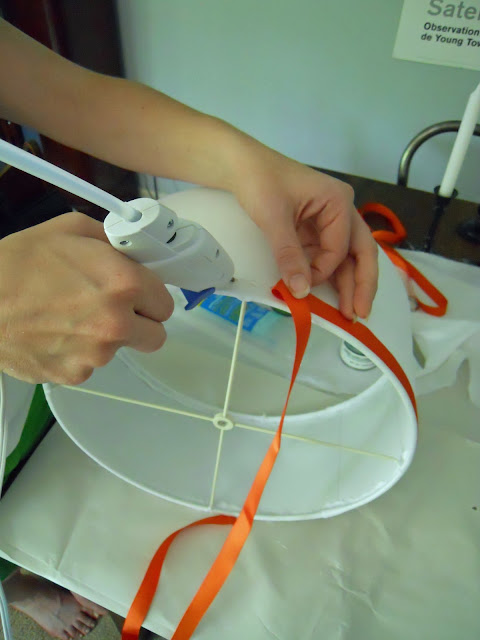 Then I applied more hot glue about six inches at a time, about half an inch off the edge of the shade, securing the ribbon as I went. 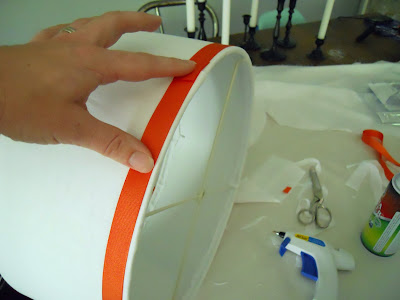 When I reached the end, I folded over the ribbon by about a quarter inch and applied a vertical drop of hot glue to attach the end to the rest of the shade. 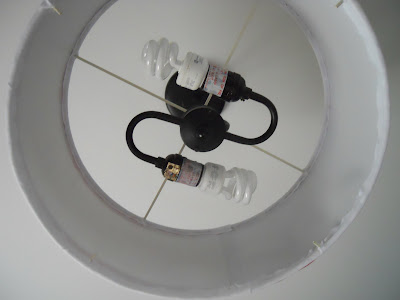 From there it was a simple matter of screwing the shade to the pendant kit that we had an electrician hang yesterday. It was something we normally would have been up to trying on our own, but unfortunately the only switch in the room was wired to a plug behind the bookcase and not to the overhead light. I’m told this is fairly common, but it honestly makes no sense to me. Anyway, while we are up to changing a fixture, we are not up to rewiring switches so the electrician got to do that. I’ll talk about that whole thing later in the week when I get to the other electrical work we had done. Yes! There is something else! Just not in the office. 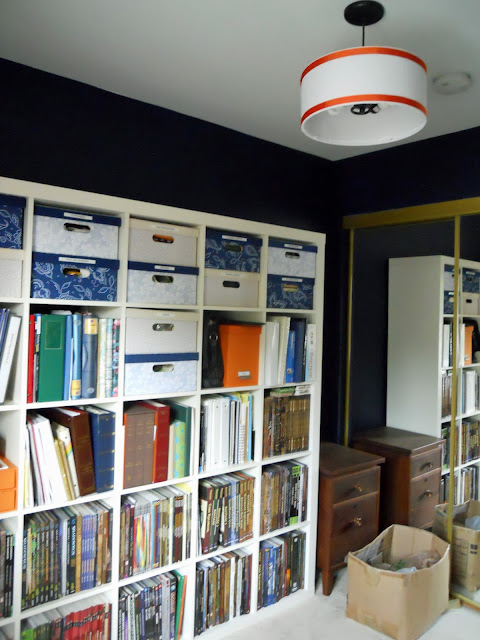 Here it is again from the other side of the room. Cool, huh? I was reasonably sure that the orange ribbon would match the orange geometric fabric we chose for the curtains because we got them from the same company and they looked the same on my screen, but to be honest, we got really lucky in how closely they really do match.
There seems to be about a hundred ways to recover a lampshade. I just cobbled together what I thought looked easiest. This way looks like it would turn out 100 times more professional looking, but frankly since I was using the diffuser and didn’t want to get my fingers that close to the hot glue, I’m happy with the way I chose.
So have you ever recovered a lampshade?
This is a post from Pies and Puggles. Republishing this article in full or in part is a violation of copyright law. And it isn’t nice. © 2010-2013, all rights reserved.