First and foremost among them was doing something about my husband’s childhood dresser. He had been using it for his clothes, but it wasn’t really very functional any more. It just didn’t fit all of them. 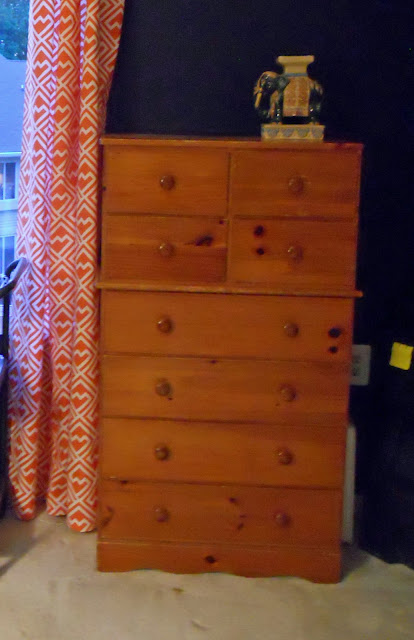 So when we found this Broyhill Brasilia piece at a thrift store last year, it became my dresser. 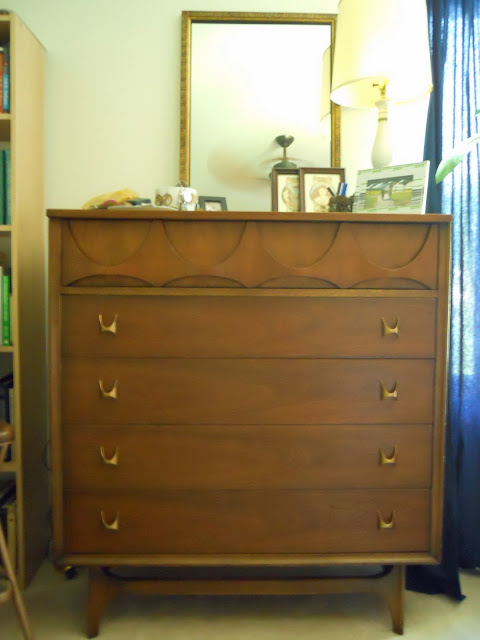 And this George Nelson for Herman Miller piece that had been my dresser became my husband’s dresser. 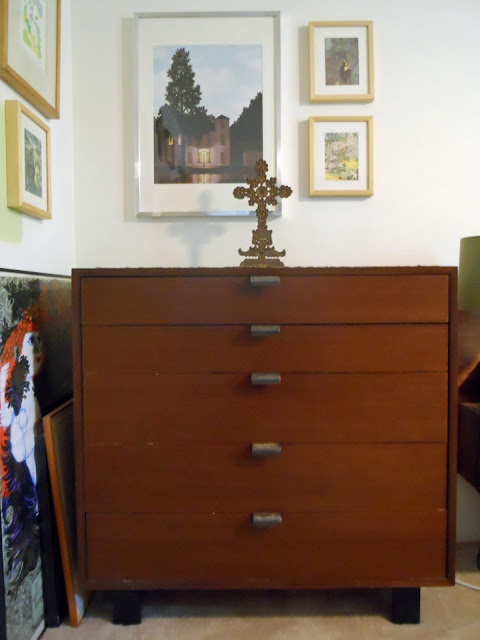 Then we had an extra dresser. We contemplated it giving it up, but it holds some sentiment for Doug since it belonged to his grandfather and it’s such a nice compact size that we opted to keep it. In fact, we moved it into the office when our burgeoning tool collection started outgrowing the shelf in the linen closet we had designated. 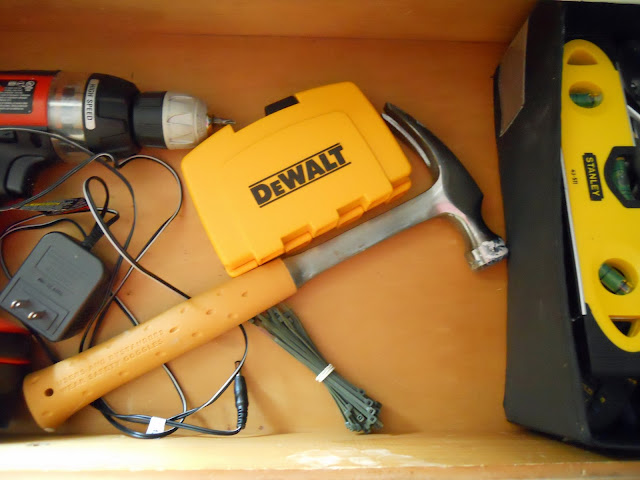 The problem was, it’s probably over 60 years old. And in that time, it had moved at least six times and gotten pretty dinged up in the process. I contemplated staining it to match the other furniture in the room, but when I actually settled down to start the sanding process, I discovered several cracks that were going to need repair and since I didn’t want to take the entire piece apart to glue panels together, I opted to use wood filler and paint the piece instead.

You can get tinted wood filler, but this finish was just too far gone for me to fix easily. So paint it was! The first thing I did was take off all the hardware, which is what inspired Monday’s post. Then I filled all the cracks and dents and holes.

Next I took everything outside and sanded it down using my orbital sander. 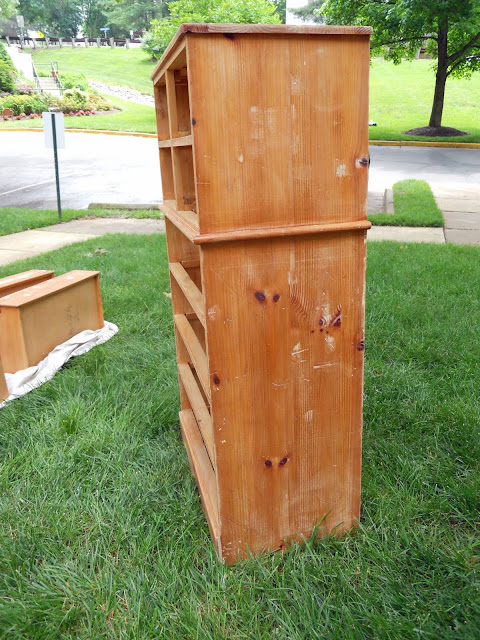 Once all the patches were sanded even and I was sure I had filled all the dents, it was time to bring everything back inside and prime. I used my usual Zinsser Bullseye 1-2-3 Primer with a small foam roller. 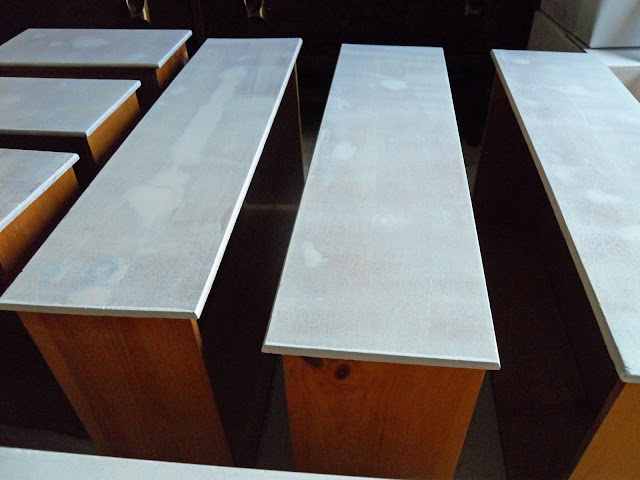 The primer gives pretty good coverage, but like all primer, it was a little blotchy. Since the finish had been thin to begin with and I sanded most of it off, I wasn’t worried about much bleed-through so I just did one coat of primer. 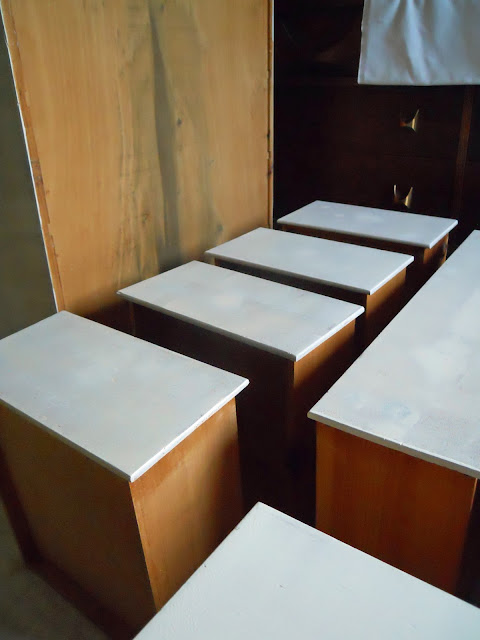 Then I waited 24 hours to paint using Benjamin Moore Advance Satin paint in Oxford White, the same color I used for the ceiling and the trim in the room. It’s a nice bright white with blue undertones and I’ve been happy with it so far so I figured no need to mess with success. 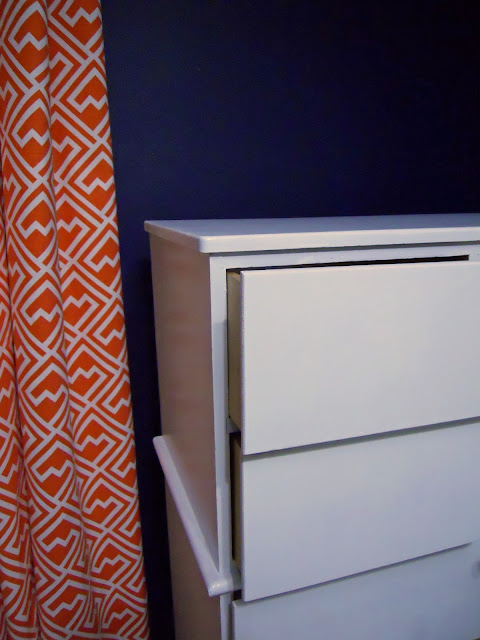 This particular paint requires a 24 hour cure time between coats so I waited another 24 hours before applying the second coat. And I waited again overnight before I went to work on adding the hardware. 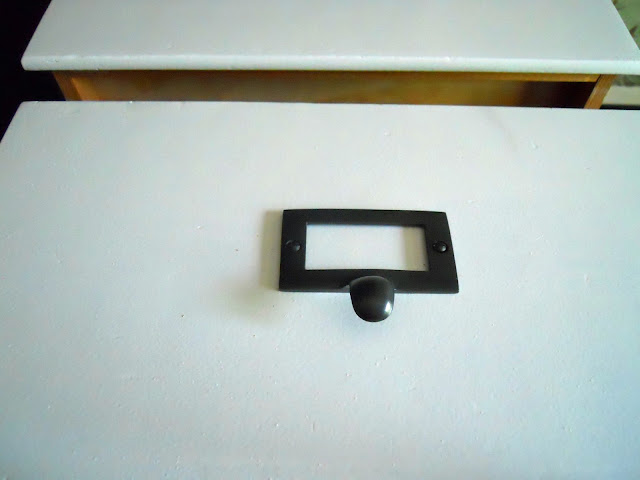 We had seen some library card catalog type pulls on the Anthropologie website a while ago and both of us loved them. We knew we wanted to use them on something, but they seemed a bit eccentric for the kitchen and bathroom. Since we both liked them, this seemed like the perfect project for them, but unfortunately, Anthropologie had discontinued the pulls in the meantime. 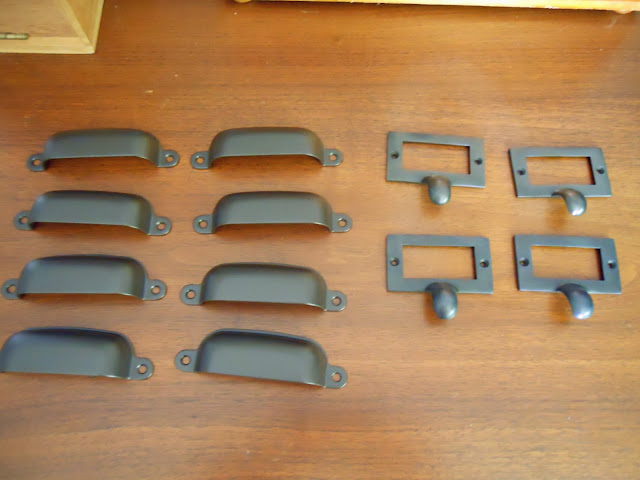 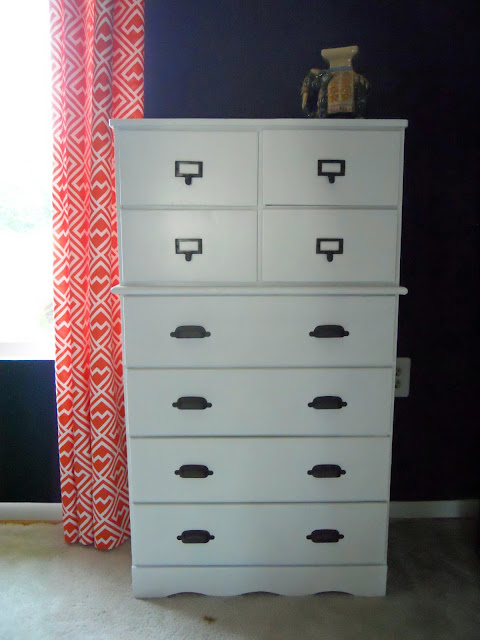 The drawers themselves could use some additional organization, but they’re functional. So much better than having one of those garage tool chests hanging around. I still have to add drawer labels so I remember what goes where, but I haven’t gotten to that yet. So let’s take a look at our checklist, shall we?

Frankly, now that the room is almost done, I’m hating the mirrored closet doors a little less, though I still have plans for them down the line. We’re making great progress though! I can’t wait to finish it up and show off the whole thing once it’s done. But first, a little before and after action, huh? 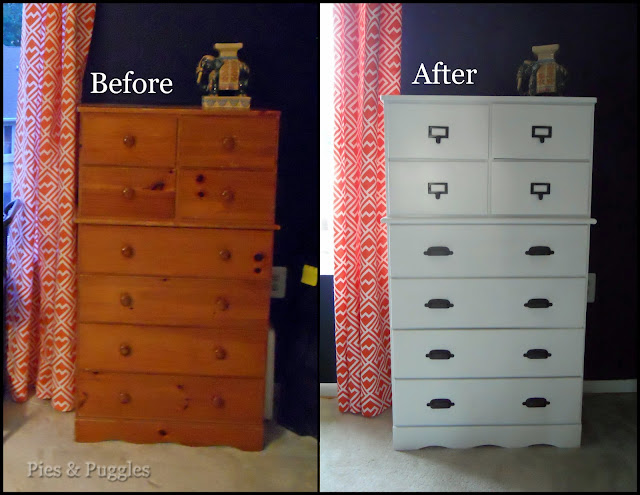 So what have you been tackling lately? Any big makeovers in your immediate future?

Linking up to: Making Home Base | Handy Man, Crafty Woman | New Nostalgia | Give Me the Goods Monday | The Shabby Nest | DIY Showoff |Uncommon Designs | Liz Marie Blog | Blissfully Ever After | Design, Dining & Diapers | Crafty Scrappy Happy | Craftberry Bush | The Shabby Creek Cottage | Link Party Palooza | The Creative Connection | Serenity Now | Share Your Creativity | Dear Creatives | Simply Create
This is a post from Pies and Puggles. Republishing this article in full or in part is a violation of copyright law. And it isn’t nice. © 2010-2013, all rights reserved.

0 thoughts on “All dressered up with nowhere to go”