So yesterday I posted the “final” update on our home office makeover. “Final” because, well, is anything ever really done? But I promised a budget breakdown so here we go, piece by piece, with sources for those who have asked. 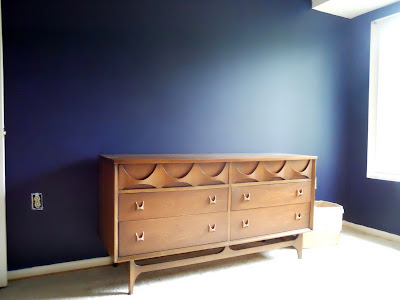 The navy blue paint is Old Navy by Benjamin Moore. We used their Regal Select in the Matte finish, which we’ve liked in the living room, where we have Silver Lake. It runs $50.00 per gallon, but when you’re working with a dark color like this, paint quality is important. I also spent another $24 on paint sample cans to get just the right blue.
The ceiling paint is Oxford White, also from Benjamin Moore. We had leftover Benjamin Moore ceiling paint from another project, but had it stored in our non-climate controlled storage unit downstairs and it separated and dried out so we had to replace it. Um…don’t do that. It cost us an extra $38.00 to replace the paint. That said, we didn’t use much of it so we should have enough for the rest of the several rooms that need new ceiling paint.
We also had leftover trim paint in Oxford White in the Regal Select Semi-Gloss leftover from the bath redecoration we did last summer. Luckily that we stored inside so no unanticipated extra cost there.
The dresser is a vintage piece from our local Salvation Army in Annandale, Virginia. We bought it last summer for $250, though we’ve had it long enough that it didn’t factor into the budget decision-making for this project. 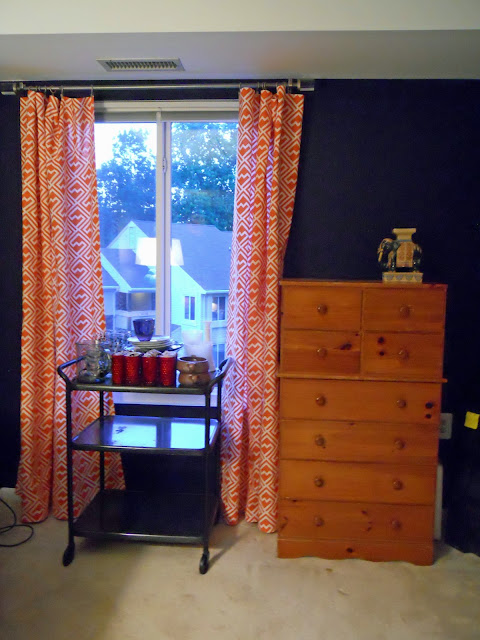 The curtain fabric is Premier Prints Shakes Slub Tangelo from Fabric.com. With a coupon code gleaned from adding myself to their email list, I got 10% off and free shipping so the fabric was $34.34. Here’s the rest of the budget breakdown for that project, which worked out to $56.42 for the curtains and hardware. 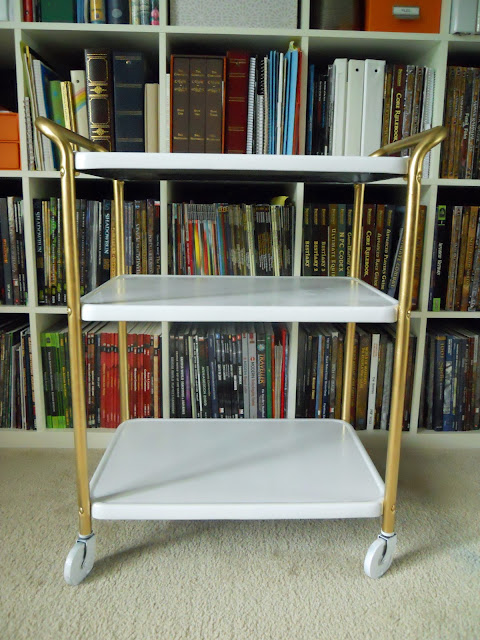 This cart cost us $9, all told. It would have been $5 just for the cart, which I picked up at the INOVA Thrift Store in Fairfax last December, but I ran out of Gloss White spray paint mid-way through and had to scamper over to Twins Ace Hardware to get more. The gold paint I had left over from another project. 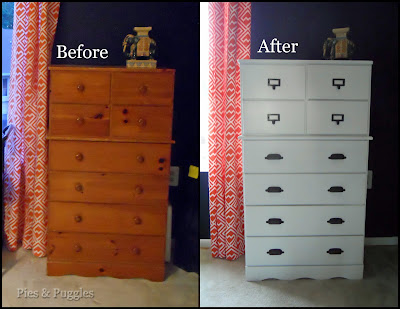 The dresser that is now our tool chest (yep, we keep painter’s tape and the drill and sandpaper and wood stain and such in here) had been my husband’s childhood dresser. We splurged a little on handles here because this is a family piece and even though we were painting it, we wanted it to continue to feel special. The oil-rubbed bronze library pulls and bin pulls came from House of Antique Hardware at a cost of $83.67 including $7 for shipping. Besides, the Benjamin Moore Advance paint in Oxford White was almost free because was left over from painting our kitchen cabinets. Actually, I’m not done with that yet so it’s not technically “left over” but I still have almost two full gallons so I know I’ll have plenty. 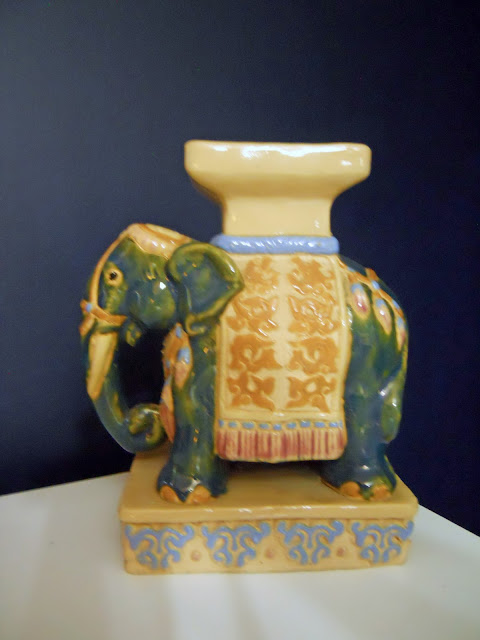 The vintage elephant I snagged for $11 from the INOVA Treasure Trove in Annandale a couple weeks ago. I’m also having another piece of Bjorn Wiinblad art framed by Total Framing in Fairfax right now for a total of $40 including the frame, which I bought at a thrift store. There will be art here soon though! I’ll do an update when it comes in. 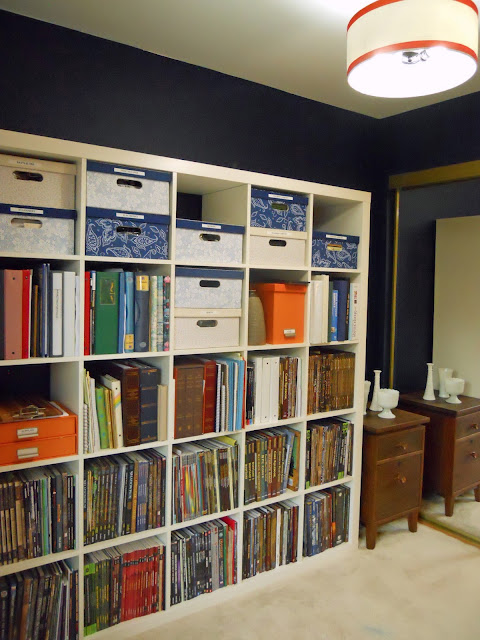 The IKEA Expedit bookcase was $200, but back when we decluttered the space, we took care to sell whatever we could either via consignment or online and managed to cover the entire cost of the new bookcase via getting rid of our old stuff that we didn’t need any more. This also opened up a bunch of space in the closet, which now has most of my Etsy store‘s packing supplies and some of the items I have already boxed up ready for shipping.
We also sold the three mismatched Expedit bookcases for $75 on Craigslist, further off-setting the cost of the project. 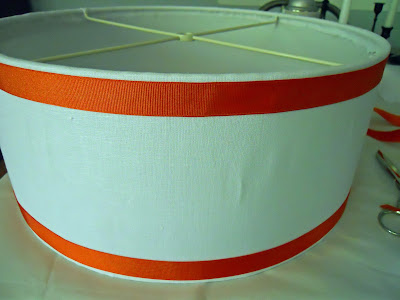 This lampshade was one of the pricier items in the room, not because the fixture itself was expensive, but because we wanted to remove the old ugly ceiling fan and get the switch rewired so that instead of controlling an outlet that currently resides behind the big bookcase, it controls the overhead light in the room. That cost us $150. The fixture itself, thanks to the $5 shade and $25 conversion kit from Decorating Outlet in Richmond, some $2 trim from Fabric.com (again after a 10% off coupon and free shipping) and a $2.33 fabric remnant from Joann’s Fabric in Fairfax, cost us $34.33. 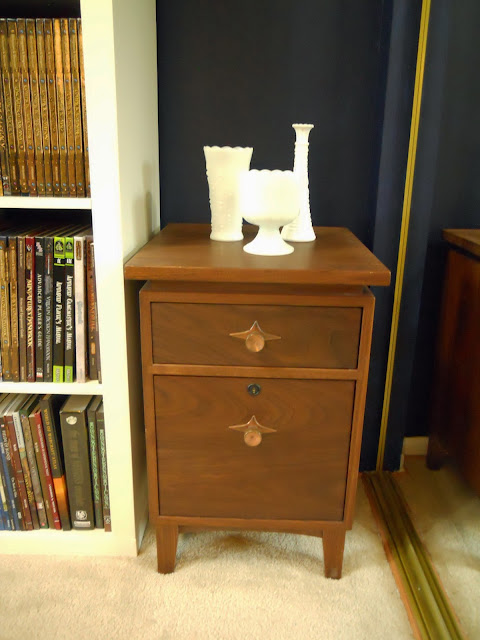 A couple people have asked about the file cabinet. I actually helped design a collection of simple, clean-lined furniture when I worked for a local furniture maker called Hardwood Artisans several years ago. I’m not sure the line is still in production and anyway, the hardware is vintage and came from Rejuvenation via their website when the piece was made. It’s real, genuine, solid walnut and weighs a ton, especially when it’s full of files. The collection of milk glass vases are available for purchase in my Etsy store and move around the house wherever I need a dose of white.
Mature art below the break. 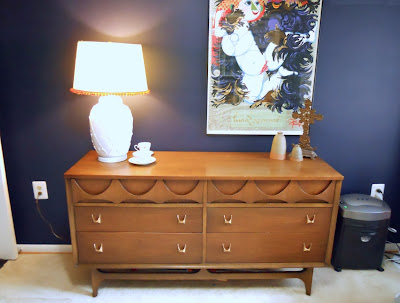 Finally, the rest of the accessories are mostly ones we’ve had for a while with a couple new things thrown in. I found a trio of heavy studio ceramic vases at the Goodwill in Annandale a few weeks ago for $2 each ($6 total). The largest of them actually resides on the Expedit across the way. The teacups are vintage Bjorn Wiinblad for Rosenthal porcelain. They’re super delicate and I’m afraid to use them so I put them here. They’ve been in storage for years so it’s nice to have them out. The iron cross is my husband’s. It was a housewarming gift from one of Doug’s seminary friends when he moved into the house before we met. Since we’ve got mixed metals in this room, I like it in here better than I liked it in the bedroom, where it was before.
The framed picture that has made blogging this room rather complicated was purchased years and years ago by me when I first discovered vintage stuff. I almost sold it, but now I’m glad I didn’t because the colors work really well here and I love it.
Finally, the lamp consists of a $15 thrift store find painted white, plus a $2 lampshade from the Habitat for Humanity Restore in Chantilly plus $3 worth of pom pom trim from Joann’s.
So when all was said and done, here’s how the budget worked out:
Paint: $112 (including $38 for new ceiling paint…waaahhhh!)
Curtains: $56.42
Lighting: $204.33 (including permanent electrical work)
Bookcase: $0 ($200 minus $200 offset from selling unwanted stuff early in the project)
White dresser: $83.67
Cart: $9.00
Walnut dresser and file cabinet: $0 (already owned)
Accessories and art: $57.00
Subtotal: $522.42
Minus $75 from selling the old bookcases on Craigslist
TOTAL: $447.42
Yay! Though in fairness, we also still do plan to spend another $300-400 on a rug for the room when and if we find the right one. Any suggestions? Cuz adding a rug to a room once it’s done is blasted difficult.
Considering we had a $1,000 budget for the project, we’re pretty pleased with how it turned out, while still staying well under budget, even when you factor in the cost of the yet-to-be-purchased rug.
Do you set a budget when you start a big project like this?
This is a post from Pies and Puggles. Republishing this article in full or in part is a violation of copyright law. And it isn’t nice. © 2010-2013, all rights reserved.