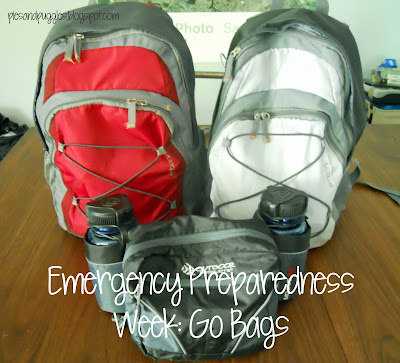 What this post is designed to help you do is not freak out or hurt yourself if you need to get away from your home or office in a hurry, but not for very long.
Introducing: The Go Bag. 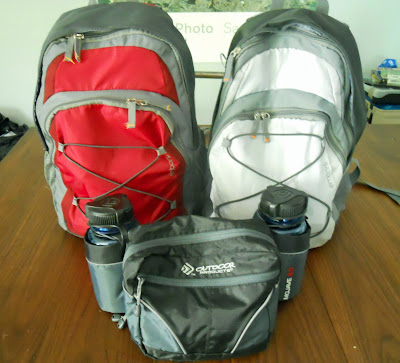 Actually, this is my go bag, Doug’s go bag and a smaller waist pack that I used to keep at the office, but that I’m packing up for Doug to take to his office.
It’s just a backpack filled with stuff that would make an impromptu authority-ordered trip a little more pleasant.
Here’s what’s in it (courtesy of Jim MacDonald’s wonderful Jump Kit page with some amendments for what is actually in my kit):
Keep in mind that you will also likely have whatever you usually keep in your pockets or purse. 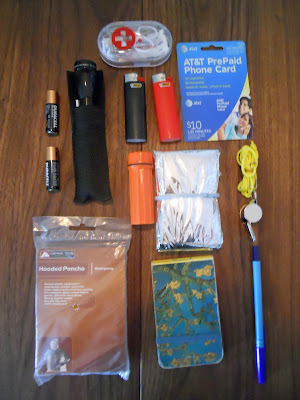 There are reasons to include every item in this list. I’m not going to detail those reasons here because Jim MacDonald, who introduced me to this concept, has already done that right here.
I’ll just add a few of my own notes because that post was written some time ago and because I’ve learned a few things about keeping these packs around and occasionally using them in non-emergency situations (unless you consider being hungry and having the dog in the car an emergency).
First, the coins, phone list and phone card. You might think these are obsolete. However, cell phones don’t always work in an emergency. You might not have a good signal, the network might be overloaded or the battery might die.
Second, the coins and the money. You might never carry cash. On a normal day, I probably have less than $20 cash in my wallet. I use my debit card everywhere. However, in an emergency, loss of power might mean that you can’t access an ATM. And credit card machines need electricity too. Have an emergency stash of cash. If you keep some at the office, it’s also handy when you forget your wallet and need to buy lunch (as long as you replace it the next day). 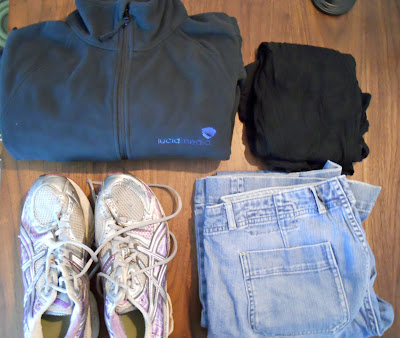 Here’s another handy thing, especially if you drive a car. Picture this: you’re in a skirt and heels (if you’re a man, bear with me here). You get a flat tire on the freeway. Do you want to change the tire in your skirt and heels? (You do know how to change a tire, right?) I used to keep this bag in my car so that when I had issues like this, I could at least put on pants and sneakers. I had to do this twice in the six years I kept this bag in my car. Now I’m rarely so dressed up so I just leave this in our front closet. 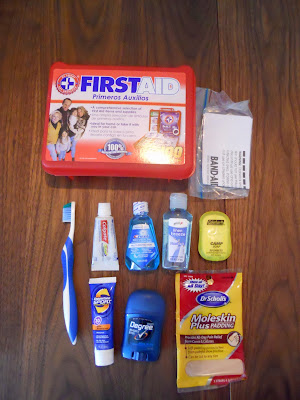 This is actually Doug’s kit. If it were just me, I wouldn’t bother with such a large first aid kit, but Doug is actually trained in first aid so we included a bigger kit for him than the little one I carry, which basically has band-aids, antibiotic ointment and alcohol prep pads in it. Note also the “camping soap”; little soap sheets that turn into one time use soap. So cool. 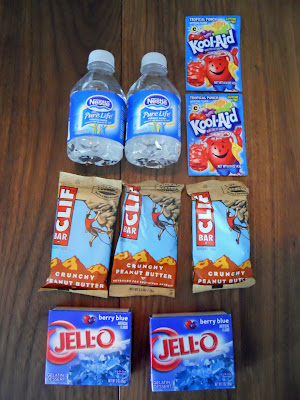 The food & water are because you need food and water. Unless you have some kind of medical condition, you can live without food for some time. Water, not so much. That said, water is heavy. So we just carry a little. By the time you really need more, chances are you’ll find some, though it might not taste very good. The Kool-Aid mix and Jello are for when you need to cover up the taste of chemically filtered water or get a quick hit of calories. The Clif bars I rotate out from time to time as I find myself on my way out somewhere without a snack. 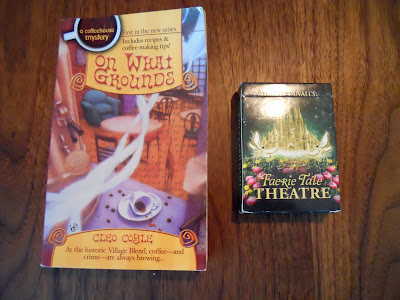 Finally, if you are evacuated as a result of fire or flood or some other localized disaster, if you’re sitting in a shelter, your biggest enemy (besides worry) will be boredom. Both Doug and I have a book and a deck of cards in our packs.
So now, a few additional notes.
So there you go. It’s not a guarantee that you won’t be miserable in an emergency, but at least you’ll be able to change your clothes, brush your teeth and tend to blisters. And chances are, that will be enough.
Are you ready to put together your own go bag?
This is a post from Pies and Puggles. Republishing this article in full or in part is a violation of copyright law. And it isn’t nice. © 2010-2013, all rights reserved.