I’ve had a really great time sharing my stories from attending the Richmond taping of Antiques Roadshow last weekend. For this last post, I met up with Matthew Quinn, an appraiser for the show, at his family’s auction house in Falls Church, Virginia. We had a nice conversation about the show, the auction business, some of the items currently waiting their turn at auction and just life in the business. On Monday we’ll be back to our regularly scheduled DIYing, thrifting and decorating posts!

Unpretentious, big-hearted, even funny? These qualities might not be what most of us think of when we think of folks in the auction business, which has a rather stuffy reputation, but it describes Matthew Quinn of Quinn’s Auction Galleries perfectly. Most of our conversation took place over coffee at Dunkin Donuts. 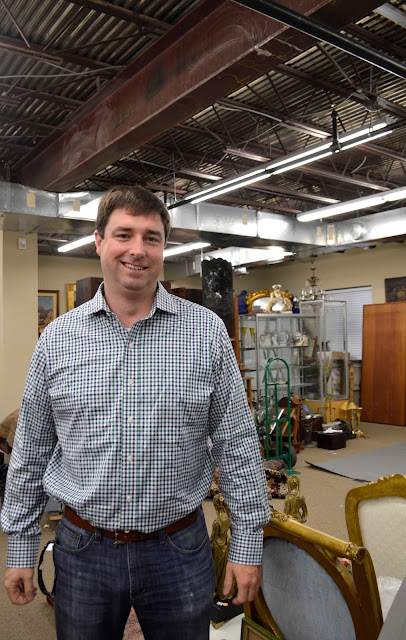 A second generation appraiser and antique business veteran, Matthew joined the family business after 8 years in public relations. His mother and father had been collectors turned dealers (hm, now where have we heard that before) turned antique mall owners turned auctioneers. His brother David and his father Paul are also both active in what is clearly a labor of love for all of them. 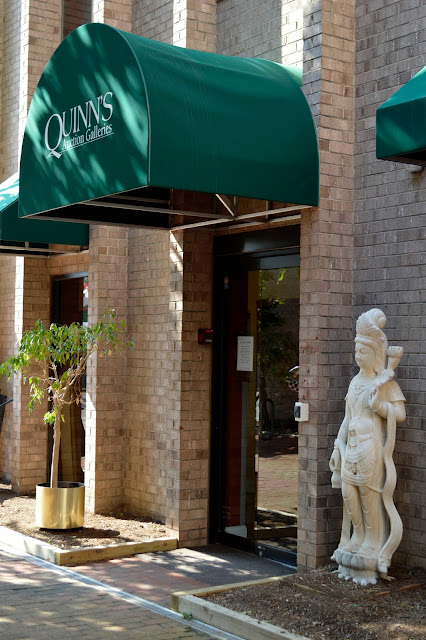 I met Matthew last weekend at Antiques Roadshow, where a little friendly bantering about Weschler’s Auction House (a local and respected competitor of Quinn’s and who I tapped to help me evaluate my Van Oorschot paintings a few months ago), led to a meeting when we both returned to Northern Virginia this week. We barely discussed television, though how Matthew ended up on the show is a funny story: initially he thought Dale Sorenson, a rare book dealer whose company Quinn’s merged with several years ago, might make a good appraiser for the show, but a chance meeting on an airplane convinced him to pitch himself instead. Though he is very young and, compared to some of the other appraisers on the show, new to the business, he applied and was accepted. When he first stepped onto the set, he says he was terrified, but four years later, he feels like he has finally gotten comfortable.

That said, we spent a lot more time talking about his philosophy of how the appraisal and auction business really should work as opposed to how it does. In fact, the first thing we discussed was ethics. Did you know that appraisers are required to charge an hourly or per item rate for their appraisals and that they should never, ever make an offer to buy what’s been offered for appraisal? Both that and charging a percentage of the value of the object as payment for the appraisal are considered unethical, which is a great thing to know as a collector, or even someone who might have to handle an estate some day.

Matthew is clearly ambitious, as not only does he have a real estate license, but Quinn’s formed a partnership with Ken Farmer, another appraiser on Roadshow, to expand their business throughout Virginia, making for a total of 120+ auctions network-wide throughout the year. He also formed a partnership with a local estate sale company, Partners, in order to help his clients get the most value for their goods. In fact, he said several times that it’s not about the stuff: it’s about the people. And as a result, Quinn’s has been offered the opportunity to auction collections over larger and better known houses because for them, it’s about the people.

I was so impressed with his take on avoiding the predatory and impersonal practices of some other firms that it made me curious about what motivates him in his business practices. He said, “My father always said that you have to be able to look yourself in the mirror and like what you see. I don’t know if that was just a parenting technique, but it stuck.”

At Quinn’s, the entire business process is arranged to ensure that no object gets overlooked. Matthew estimates that they miss less than 1% of items that hold value by training staff to look up everything they sell. Recently, in a box slated for a weekly auction, they found a James Peale hand-painted miniature on porcelain that the family didn’t even know they had that was then estimated to fetch a $2500-3500 price at auction.

Quinn’s hosts a weekly auction on Wednesday nights so if you’re a DC area local, I highly recommend getting on their email list. Plus they have periodic catalog and collector auctions for items that will appeal to collectors of specific categories of objects. From my walk around the Quinn’s facility with Matthew, it seemed like they will have some wonderful nautical and maritime objects coming up soon as well as some very big name mid century pieces.

Though Matthew has many dreams and plans for the future of Quinn’s, he acknowledges, “There is no greater privilege than doing what you love.” And it sounds like he’s doing a great job of it.