Sometimes you just need a year or two (or three) to admit when something isn’t working. I thought that when we put in the chandelier back in June, it would bother me less that the dining table seemed kind of cramped because it would look more like a real dining room. 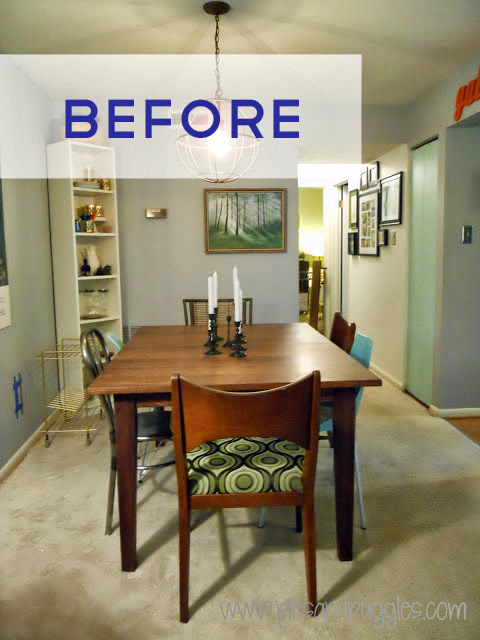 And it did feel cramped with six people sitting around it, which happens about every other weekend. It seemed more like a dining room, but I still craved more functionality for times when we entertain, which we do often.

Also, while I loved having my collection of globes front and center when I walked in the front door, it was really cutting up the floor plan and making the whole space look smaller. We’ve only got 900-ish square feet to begin with so anything that makes a space look smaller is pretty much not going to work long-term. 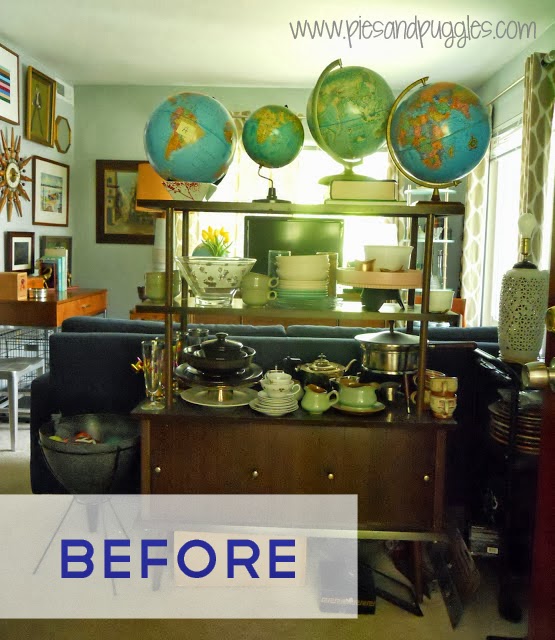 Finally, I wanted to restyle the shelving unit up there to display some of the mid century ceramics I’ve been inadvertently collecting. The photo above is a random assortment of items available in my Etsy store, but with the office cleared up, I have been storing more product in there and less in the living room.

So after much deliberation, we decided to flip-flop the two rooms. Get ready! 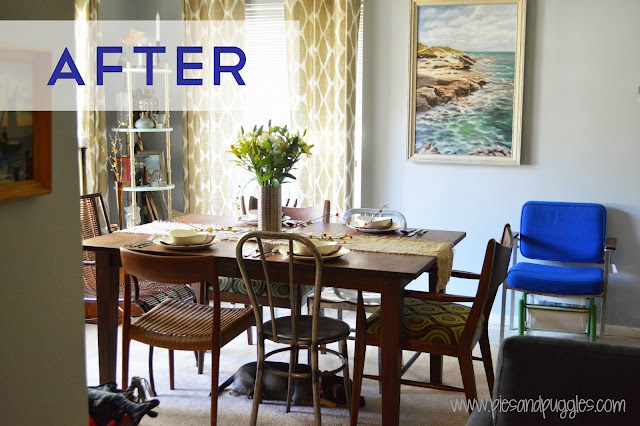 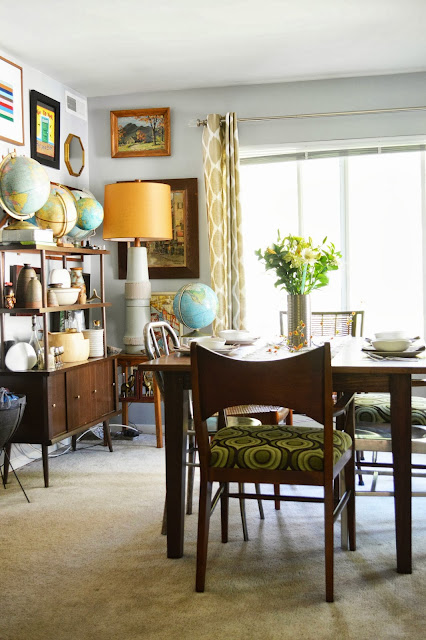 You can see our gallery wall there behind the shelving unit with all the pottery. I haven’t moved all the art around yet, but I did get a chance to do some other styling to dress the place up for fall. 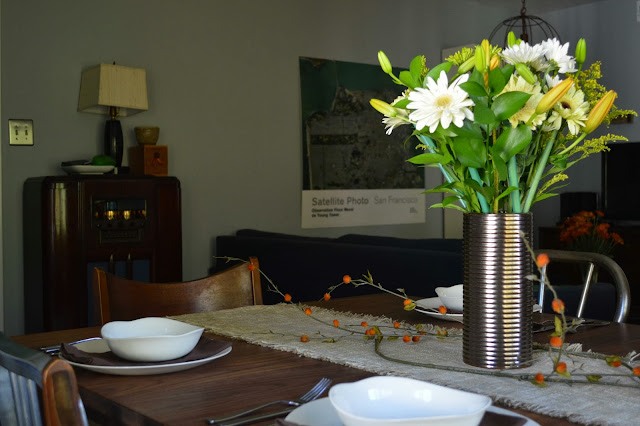 I love the lighting in this shot. It’s all dark and moody!

And then there’s the other side of the room. 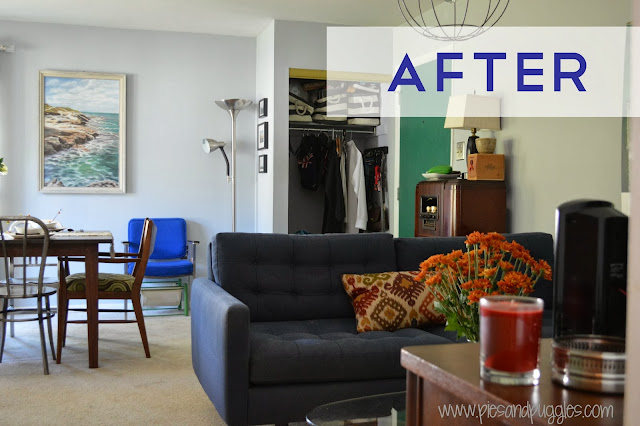 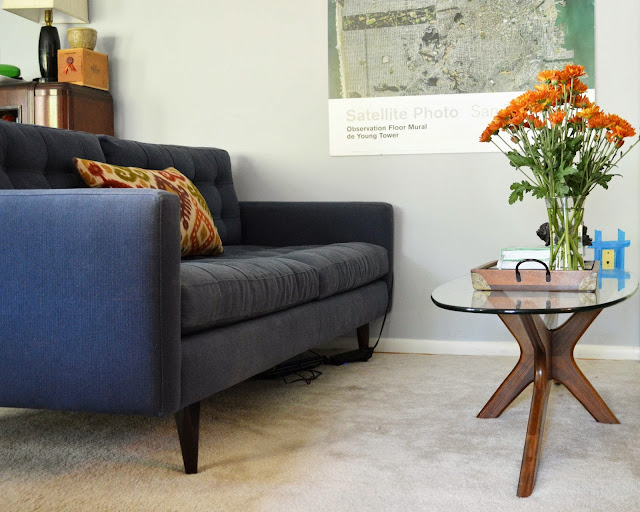 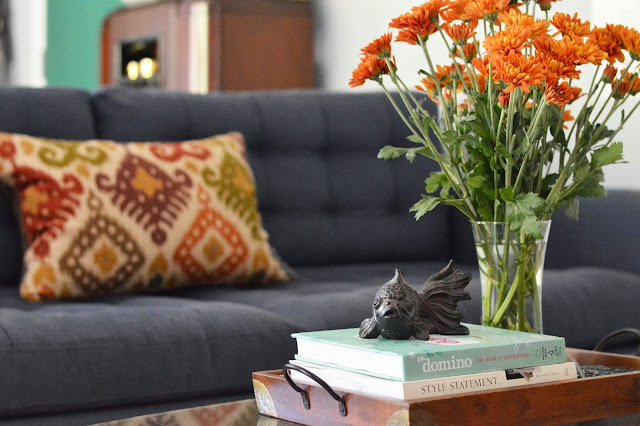 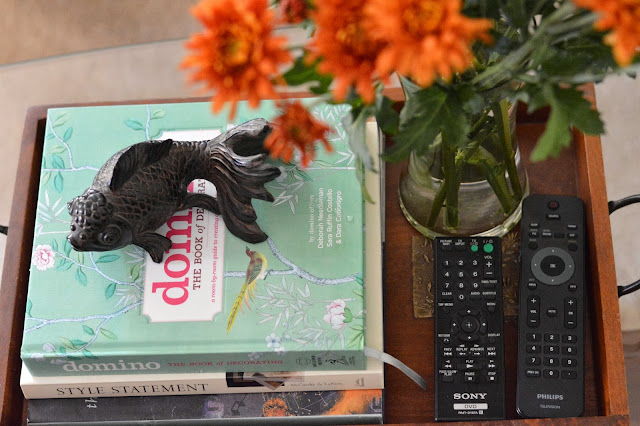 Most of this was achieved by rearranging the furniture we already had. But I did pick up a couple of things, like flowers from Trader Joe’s ($12 for three bouquets), a neutral linen table runner from Home Goods ($12) a clearance vase from Michaels ($6), and some faux greenery for the table also from Michaels ($4 on sale). The runner and vase will span seasons and fresh flowers are always nice to have around.

We still need to move the chandelier back over the table, which is going to involve a new box and new wiring (which we’ll get an electrician to do for us). We’ll also get a new overhead light (probably a flushmount) for above the living room area. Plus, we have art to move.

But so far we’re really enjoying the new set-up. We had people over on Saturday (happy birthday to me) and it was nice that no one had to get up to let other people out from behind the table for the very first time!

So what do you think of this flip flop?