I suppose other people might not call these highlights, but I’m pretty much down with anything that makes me laugh. And yesterday was nothing if not funny. There was no falling down yesterday though. In fact, no one was hurt at all.

So…Wednesday is thrift store day. The local Salvation Army has 25% off on Wednesdays so if I have to pick a day to go, why not that one? And if I’m going there anyway, I may as well also go to the Goodwill just up the road and the Inova Hospital thrift shop too. The SA and the Goodwill turned up a couple things, but my find of the day was A MUSICAL ICE BUCKET at Inova. Yes.

I was wandering through the store, scoping out the wares and I saw an aluminum ice bucket with a slightly yellowed plastic handle on top. 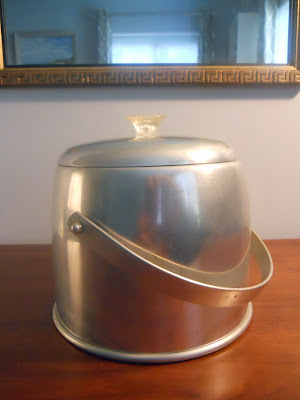 Clearly 50s right? So I moved in to investigate further. It was cheap, but the plastic knob on top had a slight chip so normally this would be something I might pass on. But something made me lift the lid and when I did, I saw this little metal bar. 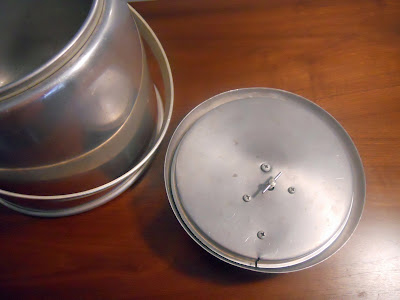 So I though what the heck and I turned it. And the ice bucket started playing a song.

I almost dropped it I was laughing so hard. A store employee had been near by and came over to look. He stared it at incredulously for a while and then beckoned over another employee, who was also vastly amused. Then we brought it up to the counter to put with the other stuff they were holding for me and we showed the volunteer manning the register. At that point other customers in the store started to take notice. An older guy who I’ve seen before lurking around the various area thrifts (mostly a record guy, I think) was clearly jealous of my find. We were all trying to figure out what song it was playing, but I think the motor needed to warm up a bit because it was pretty unintelligible at first and we were all stymied.

I got out of the store eventually and called my husband at work, who pretty much had the same reaction I did. “You bought a musical ice bucket?” I could hear the querulousness. Which then settled into recognition of my wifely brilliance. “Actually, that’s kind of cool.”

When I got it home, I wound it up again and listened carefully, figuring it out just as Doug got home:

Me: It’s “The Bear Went Over the Mountain”.

Doug: What? I’m not familiar with that song.

Me: [proceeds to sing the entirety of the song]

Doug: Honey, you do realize that’s the same tune as “For He’s a Jolly Good Fellow”?

Me: [silence] Well, yeah, it could be that too.

I also got a few other things, but I’ll save that for another post. In the meantime, I want to pass the delight along to someone else so the musical ice bucket is up in the Etsy shop. It’s a fun find for someone into the retro atomic kitsch, albeit in a rather nice a classy aluminum ice bucket package.

Oh, and I also accidentally poured half a bottle of beer on the puggle. He was alarmed and refused to come near me the rest of the night.

P.S. Wanna to partake in the gloriousness that is the musical ice bucket? Go here to see my video of it on Youtube.