I wish I were the kind of blogger who could plan projects ahead of time, order or buy all the supplies I knew I would need, then complete and blog about the project over the next couple days. Unfortunately, I’m not. At least, not yet. Maybe someday.

Which is why despite blogging about the next steps for the radio-turned-bar project more than a month ago, it has taken a while to get all the materials together and finish the project. 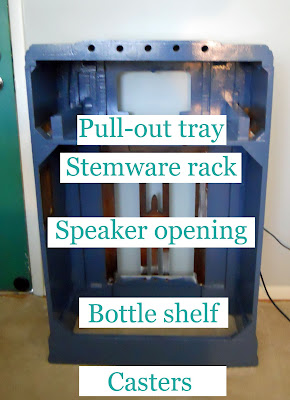 Just to remind you, here’s what was left:

Also, I left off putting the face back on the radio. Whoops. 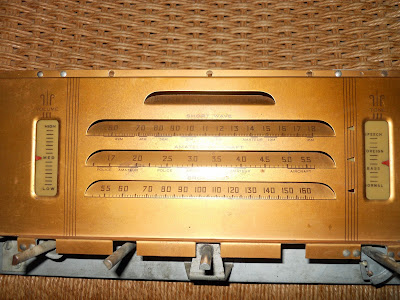 The problem was that once I actually sat down and thought about the order in which I would need to do everything, I realized that the step I’d listed last actually had to be first. Oh sure, I bought all the wood I would need for the shelving and drink-making tray. And getting the casters was pretty easy. Priming and painting the wood also needed to happen.
The problem was that once the stemware rack was mounted on the underside of the existing shelf, I wasn’t going to have the access I’d need to screw in the drink-making tray. It seemed sort of dumb to put the rack on just to take it back off again so I decided to wait.
Despite the plethora of wonderful options here in the DC area (Twins Ace Hardware in Fairfax and WoodCraft in Springfield as well as the typical Home Depot and Lowes), no one carried 12″, metal, bottom mount, low profile, 3/4 extension drawer slides. Shocker, right? (That’s sarcastic. 12″ slides are really short and a weird thing to want.) So I had to order them online from Kitchen-Cabinet-Hardware.com. They got here really fast, but by then I had moved on to other projects.
In the meantime, I got to prime and paint the wood I bought for the bottle shelf and the drink-making tray. 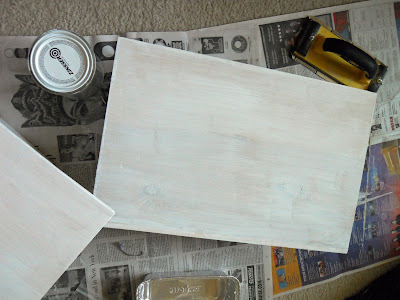 I also primed and painted the stemware rack. 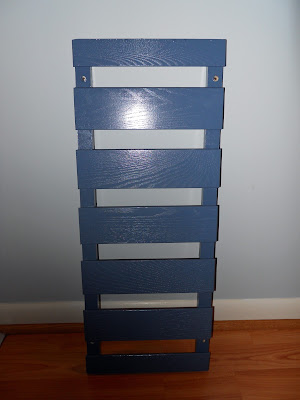 And put the casters on. First I marked the holes with a Sharpie and drilled pilot holes for the screws. Whatever this secondary wood is, it’s hard stuff. 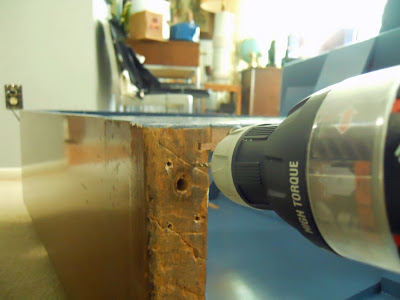 Then I screwed on each of the casters. Unfortunately, three casters in, I over-tightened the chuck and had to take the drill to Twins Ace Hardware to beg some help. They have a bench-mounted vise and channel locks and managed to unstick it for me so I could finish. They didn’t even charge me for it. See, they’re just the best!

I also nailed the speaker opening cover into the cabinet. I considered using a frame with some sort of fabric or paper, but ultimately I couldn’t find anything I liked so I just used a painted piece of half-inch plywood. 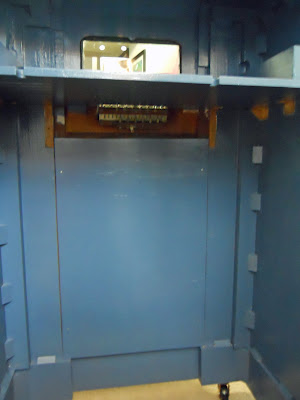 As I was getting prepared to mount the stemware rack, I discovered that the fit of my Goodwill find wasn’t as great as I’d originally thought because there were some old support pieces in the way. Since the stemware rack and, ultimately, the stemware, won’t be as heavy as a steel radio chassis, I figured removing a couple of them wouldn’t be the end of the world. 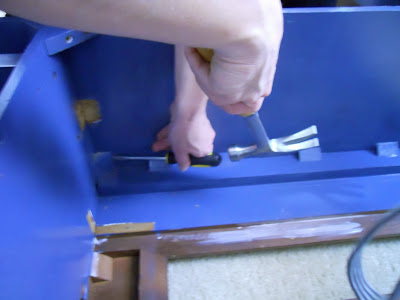 Since I still haven’t purchased an actual chisel, that’s a flat-head screwdriver. I used it to get between the blocks and the cabinet side and just hammered the screwdriver until they popped off. I really need a chisel. Will someone remind me of that the next time I go to the hardware store?

I also put the face back on and touched up the paint where I removed the support pieces though I won’t show that until the whole thing is all done since I think it would rather spoil the effect.
So now the to do list looks like this:
– Refinish exterior of radio cabinet
– Sand and paint interior of radio cabinet
– Prime, paint and install stemware rack
– Measure speaker opening, cut, prime & paint or cover, and install wood
– Build, prime, paint and install shelf for bottles
– Source and install casters for base of unit
– Source and install slide-out serving tray for drink-making
– Put the face back on the front of the radio
So with the new bar nearly finished, I guess I’ll be needing a new project. Anyone got any ideas?
This is a post from Pies and Puggles. Republishing this article in full or in part is a violation of copyright law. And it isn’t nice. © 2010-2013, all rights reserved.