This is Chester, Ali and Doug’s puggle. I have taken over blogging duties this week while my human companions are on vacation.

I’m told (this was way before my time, of course) that Doug purchased a used Hyundai right before he met Ali in 2009. 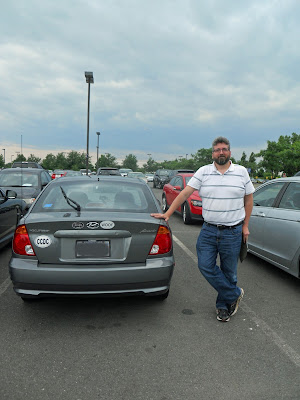 I don’t know what those other stickers mean. But since they aren’t about me (like the WOOF sticker is), they obviously aren’t important.

He’s said that he always buys cars used and then runs them into the ground before trading them in for another used car. Well, since he started taking the train to work (where I usually try to meet him when he comes home – he’s always glad to see us at the station) and since Ali started her Etsy business they haven’t driven their cars nearly as much as they used to  – and even then, far too often without me. So over the Lent season this year, they took the radical step of giving up driving one of the cars. It worked out surprisingly well. There was only one time in all 40 days that they may have needed two cars, and they foresaw the conflict (just in time) and made other arrangements. Therefore, they decided to give up one of the cars permanently – and since Ali’s car is more versatile, gets better gas mileage, and is worth more, Doug’s car got the chop. 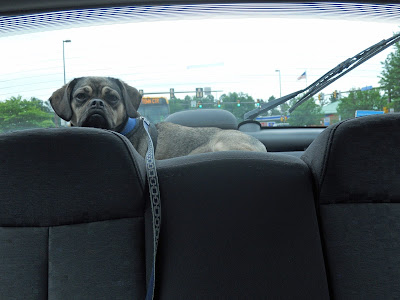 My last ride in the back of Doug’s car – a bittersweet enjoyment.

Doug bought his car at CarMax, and they thought they should give CarMax first right of refusal to buy it back before they tried other venues (such as Hyundai dealers, who apparently have been bombarding Doug with mail offers to buy his car for months). This afternoon we took a ride out to Dulles to see what they could offer for the car – after taking it to a car wash shop for a touch-up of course (they especially grumbled about there being a lot of dog hair in the car, but really – it lends a certain ambiance to any place well-lived-in by a dog of sophistication and taste). Ali and I waited outside while Doug talked to the CarMax staff and got the appraisal and offered price. The staff, from what Doug told us, was very efficient and attentive. I can attest to this – they offered to let Ali and I wait inside in the waiting area three times while we stood outside. But I wanted to enjoy the outside (and as it turns out, we didn’t have to wait that long after all). 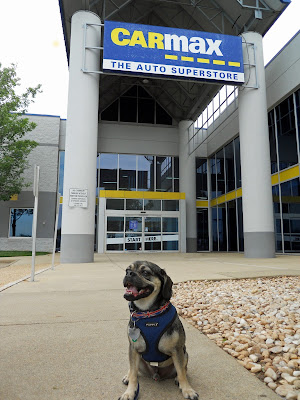 Striking a pose outside CarMax – I make anyplace look good, don’t I?

As it turned out, they offered Doug almost exactly what Edmunds estimated the car would be worth for trade -in. And since Doug was expecting an offer somewhat less, and wanted to get the deal done before the registration expired, the deal was struck. Ali and Doug took the car to CarMax later that afternoon, and just as the appraisal was quick and efficient, the purchase and paperwork were handled just as quickly. (Which was all well and good, since they left me home for that part of the deal. I was not very happy with that turn of events.) Doug now has a nice check to deposit, and with the prospects of lower gasoline bills, state taxes, and insurance payments, I expect to see a few more new toys to be showing up around the place from now on. 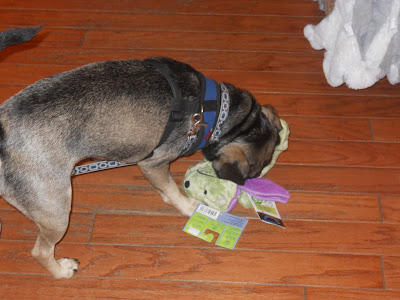