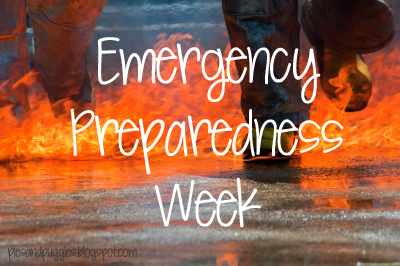 Last week, a train derailed in Quebec. Five people died, dozens of people are still missing and 2,000 people in a town of 6,000 were evacuated.

So here’s a question: what would you do if the local police came to your door at 2 am and said you needed to evacuate, even just 20 miles away? This can happen anywhere. There are fires, floods, the aforementioned train accidents, chemical spills, and yes, terrorist attacks.

I realize this is not glitter puggles. This is serious stuff. It’s a far cry from the thrifting, decorating and DIYing I usually talk about. Just to be clear, I’m no doomsday prepper. I’m not talking about the zombie apocalypse, the fall of all major Western governments or the end of civilization as we know it. I’m just talking about the times when Metro shuts down and you find yourself in four-inch heels walking across the Key Bridge. Yep, it happened.

When Doug and I both used to drive to work, we kept some stuff in our cars that we might need in the event of an emergency. And when we sold Doug’s car recently, we took his pack out of his car and so we decided to take that opportunity to do an inventory of our emergency stuff. And while I did it, I thought I’d put together a week of posts about how we’ve prepared for possible disasters.

Here’s where I started, with a guy named James MacDonald, who is a science fiction and fantasy writer and also happens to be an EMT trained in disaster preparedness. If you need more about why you should consider emergency preparedness a priority, you can read this and this. And hey, it’s isn’t hard. Or all that expensive. So whatcha waiting for?

As for what I’ll be posting about this week, tomorrow there will be TWO posts! One will be the Completely Unofficial YHL Book Project Challenge post. The other will be a post about go bags, also called jump kits, which you would use in a localized emergency (or, you know, when you get a flat tire, rip your skirt or need a snack). Later in the week we’re also going to talk about car emergencies, house emergencies, financial emergencies and finally, a post about estate planning especially for those of us without dependents (except maybe a dog or two).

Nope, no one wants to think about any of this. I’ve been through three minor disasters in my life. I got lucky every time and no one and nothing close to me was seriously damaged. But someday I won’t be so lucky and I’ll be very glad that I did the preparation before preparation was a necessity.

So come on and join me!