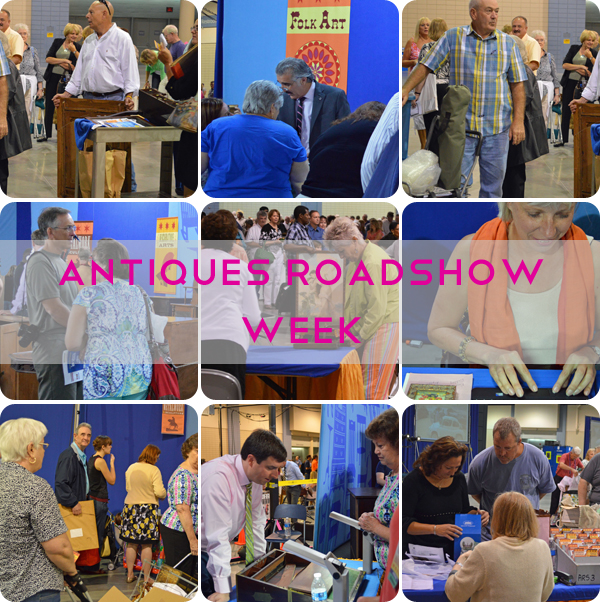 Last Saturday, I attended a taping of the long-running PBS television show Antiques Roadshow. I’d been a fan for a long time and I think I’ve seen every episode that’s ever been available online, but the trip still held some surprises for me.

I’ll start with how a day at Antiques Roadshow develops. First, you have to apply to be selected to receive your free tickets. That happens in January through April. Then in May, you find out whether you got tickets in the random drawing.

The tickets are timed (9 am, 10 am, 11 am, etc.) so when you arrive, the first thing you do is get into a line with others who have your ticket time. 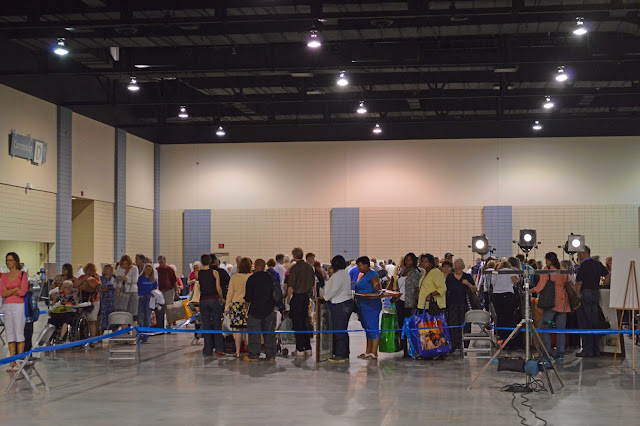 This first line (warning: there are lots of lines at Antiques Roadshow) is a line to have your items sorted by generalist appraisers who assign you a category and give you tickets for the proper categories to have your items appraised by the Roadshow experts. 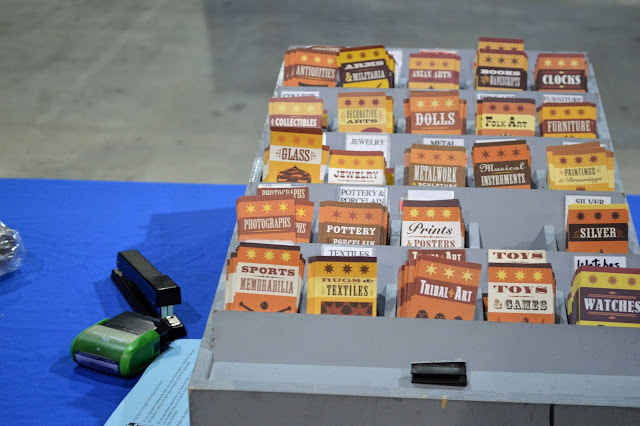 This process seems to go pretty quickly because generally, separating furniture from paintings from militaria is pretty simple. I had one item that might have fit two categories, but they didn’t obsess about it and in fact, I ended up getting walked across the room to see another appraiser at one point once I got inside, so the categories aren’t set in stone here. 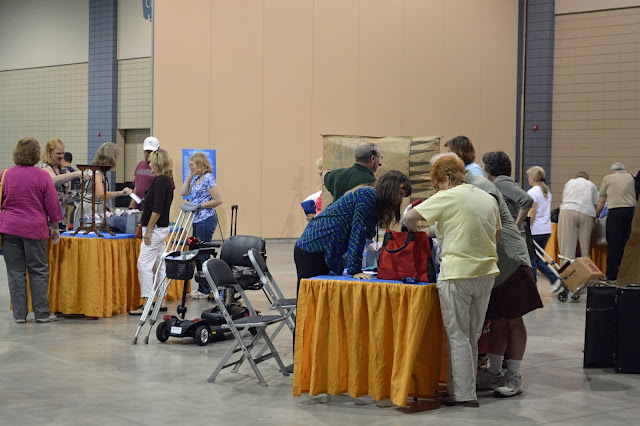 Once you’ve obtained your category tickets, you are escorted into the Antiques Roadshow set, where a nice volunteer delivers you to the second line of the day, which corresponds to the category to which your item was assigned. Most of the people in any given line are actually waiting just outside the set, which you can’t really see when you watch the show. 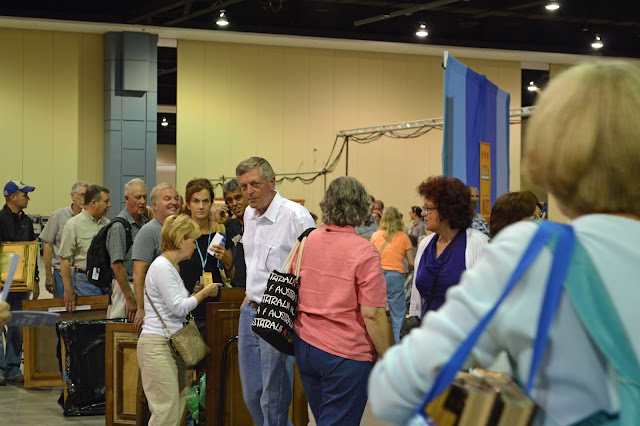 One thing that surprised me was that despite being in a convention hall, the set is actually rather small. I had assumed that the appraisals would be held along the walls and that the taping would occur in the middle, which is true, but the set was probably no more than 120 feet across. 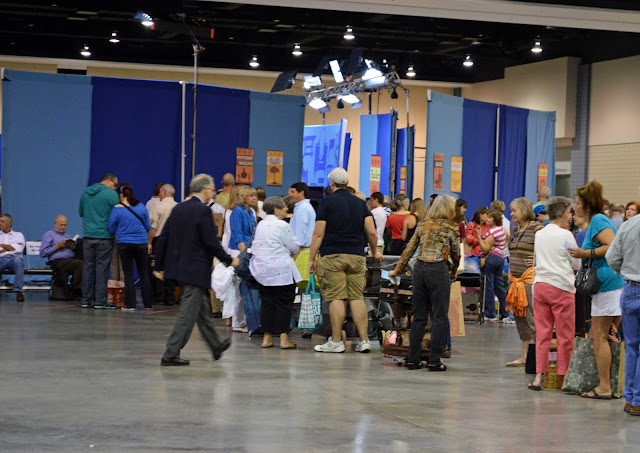 A few at a time, people are let into the main set. The five or six people waiting in each category are the only people you can really see in the background when there is an appraisal being taped in the center, but in many categories there are dozens or even a hundred more waiting outside the immediate set. That brought me to my next surprise. I had mistakenly assumed that the appraisers doing the appraisals on camera are the “A team” and that there would be other folks around that you don’t see on television sorting out the bad from the good from the truly exemplary objects. Not true. I got to meet Matthew Quinn, Colleene Fesko, Suzanne Perrault, David Lackey and LaGina Austin while they looked over what I had brought. I didn’t want to interrupt Ken Farmer, David Rago or Christopher Mitchell while they were talking with other attendees, but I saw them too. Some people go gaga over sports heroes and pop stars. Me? Forget Justin Timberlake. I wanted to meet NICHOLAS LOWRY. Could I be any nerdier?

Actually many of the appraisers are very funny. You don’t always get to see their personalities in the short taped segments they do for the show, but many of the appraisers I had assumed might be rather stuffy from their appearance on television weren’t at all. I’ll have an in-depth profile of one of them later in the week, which should show you what I mean. 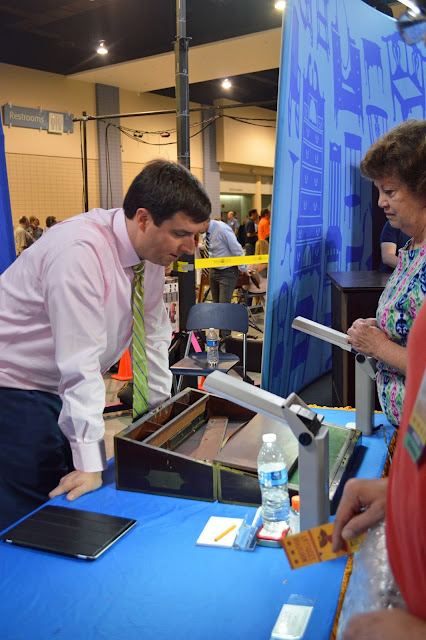 Only about 90 objects are appraised in front of the camera and only about half that many make it to the show. Very reasonably, the producers ask that press not photograph or film appraisals as they take place. No spoilers! However I did speak to one woman, Diana from Virginia, who had selected this vintage perfume bottle from an uncle’s antique store. He didn’t understand why she wanted it back when she was 15, but let her have it anyway and it turned into a perfume bottle collection later in life. She found out that it was from the turn of the century and it ended up being worth about $75. Not a fortune, but certainly not junk! 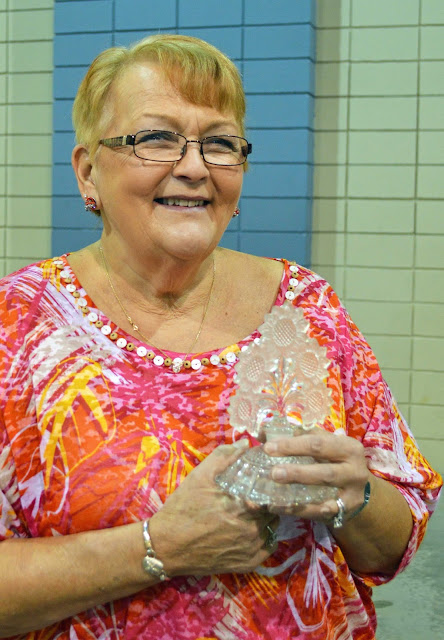 All in all, the atmosphere was festive as people chatted with each other in anticipation of finally discovering whether that painting they inherited or that dirty chair they found in an attic might be of real value. Doug and I had a really good time chatting with people and listening to what the appraisers had to say about everyone’s items.

So did my picks turn out to be treasures? Well, no. But stay tuned tomorrow for tips and tricks for identifying objects, researching your finds, more pictures from Antiques Roadshow and what I found out about the items I brought to Richmond!