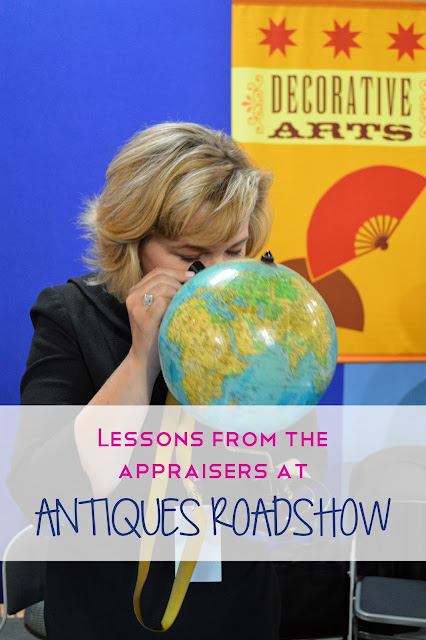 At the end of every Antiques Roadshow episode, the last appraisal of the hour is always something spectacular. And while I have two more posts this week that are tangentially related to the show, this is the last one about the day we spent at the taping we attended.

Sadly, this isn’t the moment when I tell you that I’ve been pulling your leg all week and I’m now a millionaire.

What I had was a bunch of mysteries that couldn’t be solved in the few minutes an appraiser has to spend with each item. But that’s okay because I still learned an awful lot about the process of identifying and evaluating antique and vintage objects. With each object I brought, there was a new lesson. So in addition to sharing what the appraisers were able to tell me, I’ll share the lessons I gleaned from my conversations with them. 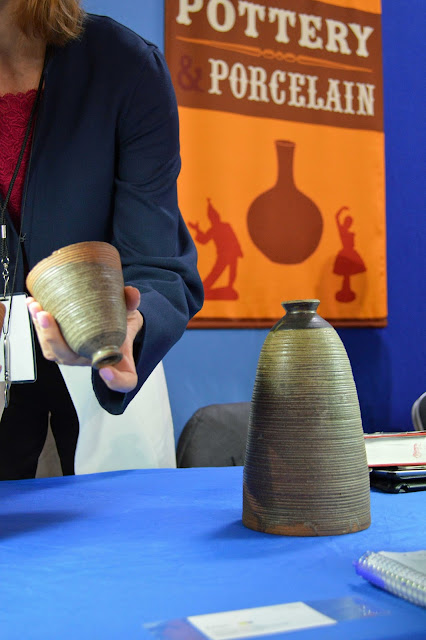 The first piece I offered up for evaluation was my trio of stoneware vases. My appraiser was the knowledgeable, accomplished Suzanne Perrault. The first thing that happened in this appraisal was that she turned over the vase to look at the mark and pronounced it, “Definitely Herman Kahler.” There was some doubt about the spelling, which led to a quick conversation behind the table with her partner David Rago, who supplied several possible alternate spellings. Luckily, I’d had a tip-off from bigbird at MODish and so was able to supply the correct version. Unfortunately, a search on Kahler revealed nothing that looked anything remotely like the vases I had brought and a death date of 1917. Since these pieces are clearly mid century, they were pronounced worth “under $500” and we left it at that.

Which leads me to my first lesson: Be bold. 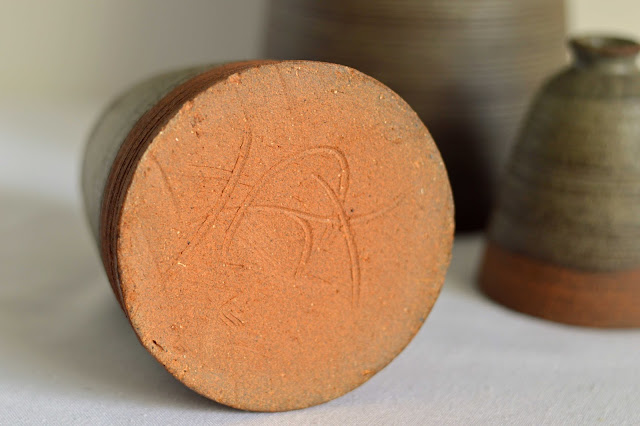 Upon receiving the intelligence that the mark was definitely Herman A. Kahler, that the vases were almost certainly Danish and that the work was “not a first attempt” in the words of appraiser David Lackey, I was emboldened to email photos to a blogger, dealer and collector of Danish modern pottery, Ray Garrod of Retro Pottery Net, who promptly responded that Suzanne had indeed been correct. The vases are Herman A. Kahler because after his death, his studio, including several relatives, continued to use the mark for the family pottery business. Though Ray lamented that the company’s documentation from the 1950s through 1970s was not as extensive as it might be, he had no doubt that my trio of vases was from the 1970s and likely worth about $100-200 per piece, making the set worth around $500 as Suzanne had asserted. Since I paid $6 for all three of them at the Goodwill in Annandale, I’m pretty pleased about this one.

Next time I have a mystery on my hands, I won’t wait so long to email an expert. 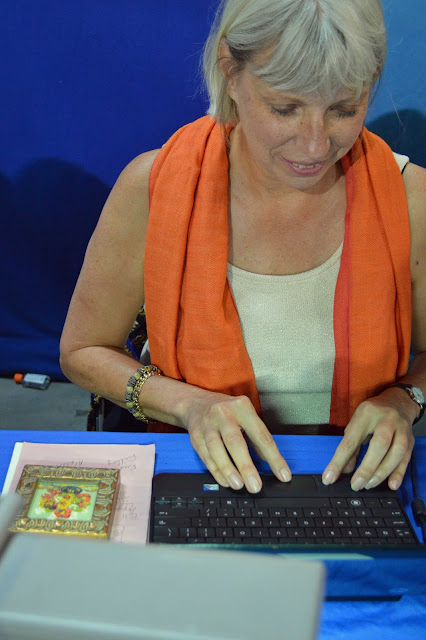 Next up was Colleene Fesko, who looked at my Irene Rozek miniature painting and my colorful mystery painting. The Rozek turned out not to be too much of a mystery after I figured out right before Roadshow that the signature I was looking at was “Rozek” and not “Rolek”. Unfortunately, Rozek wasn’t in any of the auction databases. However, Colleene was able to determine that the painting was post-1929 because it’s painted on Masonite. Based on the style of both the painting and the frame, she asserted that it was certainly from the 1950s or 1960s. I didn’t know that about Masonite so that’s something else to look for when I’m out looking at things in thrift stores.

Then she moved on to this guy, which anchors our gallery wall back at home. 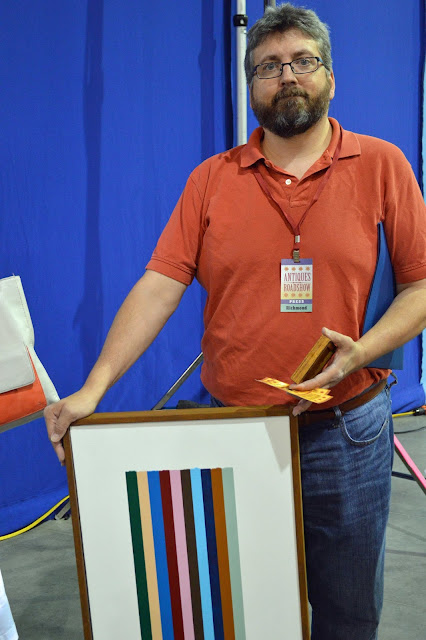 Colleene was able to confirm for me that this painting is definitely acrylic, which dates it to mid century or later. She pronounced the palette good, but couldn’t identify the signature. And while I had been referring to it as “color field,” she said she’d call it more “geometric abstraction” which was helpful because in my mind, that broadens the time period I should be looking in. Colleene thought that further avenues for exploration should include art schools and local museums.

Which leads me to my second lesson: Be persistent.

After we got home, I tracked down some additional Irene Rozek paintings available in the marketplace with my trusty sidekick, Google. There is one up on Etsy right now for $20 and several have have sold on eBay for $20. So absent a major art and auction database like Artfact or AskArt telling us differently, I’m calling this one as worth $20. Since I paid $5 for it at the INOVA Fairfax Thrift Shop, I think that’s a win.

As for the other painting, that’s going to take a little more research. So applying Rule #1: Be bold, I’ll be making a trip downtown to the Smithsonian’s library some time soon and I’ll be tracking down someone at the Corcoran who might be able to tell me whether they keeps records of student work. It’s a fun research project for my free time. 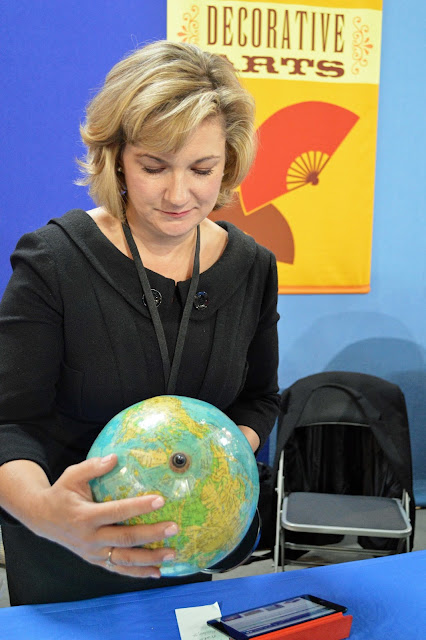 The last evaluation for the day was our weird little foreign language globe. This globe presented a much bigger challenge for the appraisers than I had expected. First of all, we were directed to the Decorative Arts category in the “triage” area because that’s where globes go. My appraiser for the globe was LaGina Austin (pictured above), though Matthew Quinn and also Nicholas Lowry ended up coming to the party as well.

LaGina was able to tell us that the globe was not done via conventional ink jet printing, but via something more like lithography and likely made in the 1950s, which placed it later than Doug and I had imagined. However, because the majority of it is not in English, but a combination of French, Russian and some Slavic language, it was difficult to figure out what we wanted to know, which was where it came from and what time period it depicts. 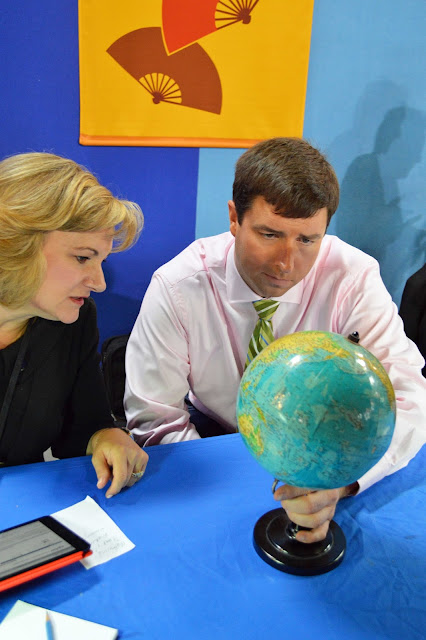 At this point, Matthew Quinn’s evaluation of a lap desk ended and he popped over to take a look, with results similar to LaGina’s. A consensus was reached to take us across the room to the prints and photography table, where map expert Christopher Lane resides. However, since Christopher was busy filming a segment on a post-Civil War map the size of our dining room table for the show, we got to talk to Nicholas Lowry instead. 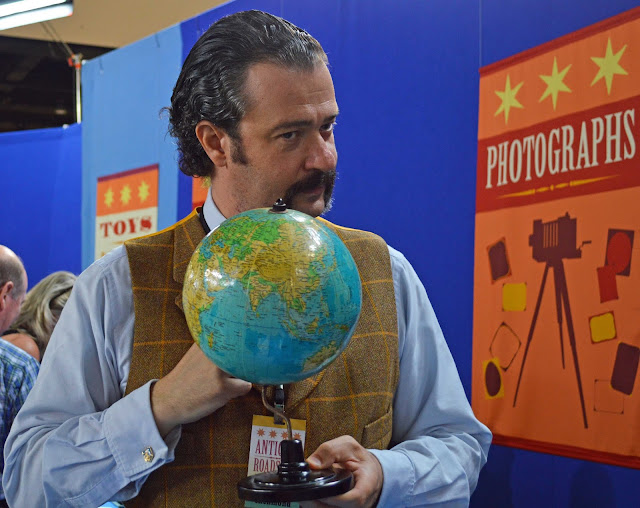 Though he was principally employed in trying to hide behind the globe while I took pictures, he was able to discern that the cartographer’s name was Stefan Popescu, implying a Romanian origin. Upon returning home, I determined that another tiny clue (seriously, it’s really small) identified a seal as that of Brasov, a town in Romania. So while we never did get a valuation or a date, at least I’m convinced that what we’ve got here is a Romanian globe.

As for the last lesson? Be humble. It’s okay to admit you don’t know.

When the appraisers at the Decorative Arts table found themselves without the necessary language knowledge to decipher the globe’s legend, they sent us across the room to talk to appraisers who had specialized experience with maps. Three appraisers and one Google search later, we got (half) our answer. As for solving the rest of the puzzle, which is when this globe was made, I think I know what my next step needs to be: find someone who speaks Romanian since we, uh, DON’T.

So what did my evaluation experiences at Antiques Roadshow teach me?

The sum total is that I left Antiques Roadshow feeling more confident in my ability to evaluate, research and value objects for myself. This is a pretty essential skill when you’re standing in the Goodwill trying to decide whether those three vases you see are from Pottery Barn circa 2009 or Denmark circa 1970 and worth the $6 the thrift store thinks they’re worth or the $500 pottery collectors might think they’re worth. So while it helps to have a good eye and a lot of experience, in some cases, a little boldness, persistence and humility can get you pretty far on your own.

Linking up to: Wicked Awesome Wednesday at Handy Man, Crafty Woman | Give Me The Goods Monday

0 thoughts on “Three lessons from the appraisers at Antiques Roadshow”