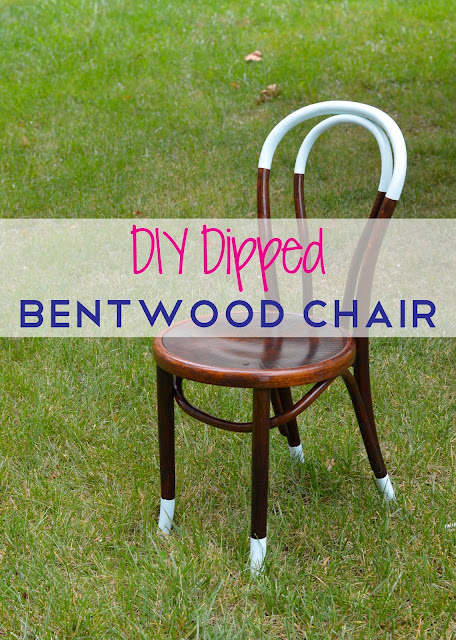 On Monday, I mentioned that I had found an old bentwood chair at the Goodwill in Annandale for just $10 and I was considering painting it. And rather than doe a solid color, I decided to spruce up the wood a bit and then dip my toe in the dip dyed trend that has been making the rounds this year. So here’s what I started with. 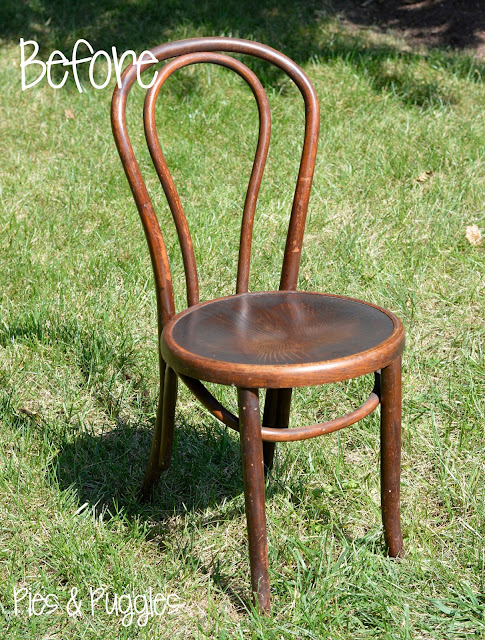 First thing, I decided to determine what the finish on this chair was so I could clean it up a bit. I strongly dislike the look of over-refinished antiques and so if I can clean and repair a finish, I’d much rather do that than strip and refinish. Plus, it’s faster! I got a clue about this finish down near the back feet of the chair. 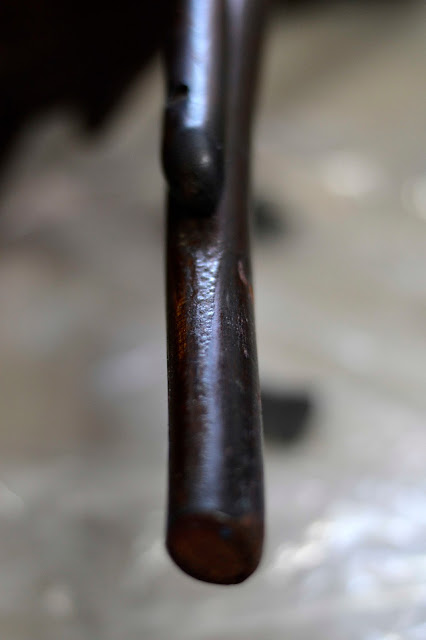 See how the finish looks like the back of some kind of reptile? All bumpy and uneven? That’s often called “alligatoring” which isn’t really a technical term, but you’ll see it a lot when people talk about old finishes. Generally when you see that, it’s old shellac, which given the age of this chair was completely possible. Luckily, I had some denatured alcohol left over from the antique movie theater seats I restored a few months ago so it was pretty easy to test whether I was right or not. 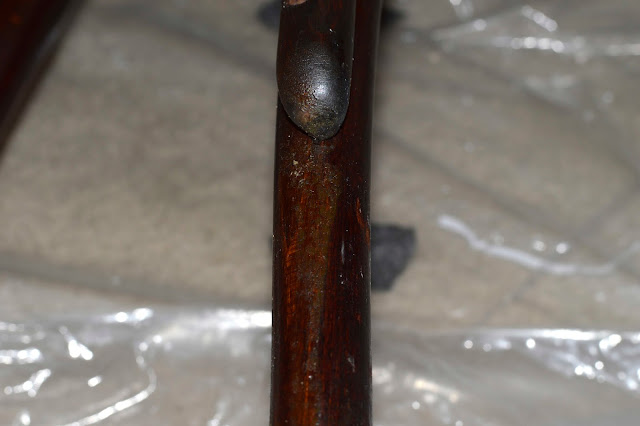 See, every finish has a corresponding solvent. For shellac, you use denatured alcohol. The magic of shellac is that it’s almost infinitely repairable. Just by rubbing down the feet with a little bit of denatured alcohol on a lint free cloth, I was able to wipe off the damaged finish. Even though the feet were the worst, I went over the whole chair, removing the shellac anywhere it had pooled. They were pretty grungy. 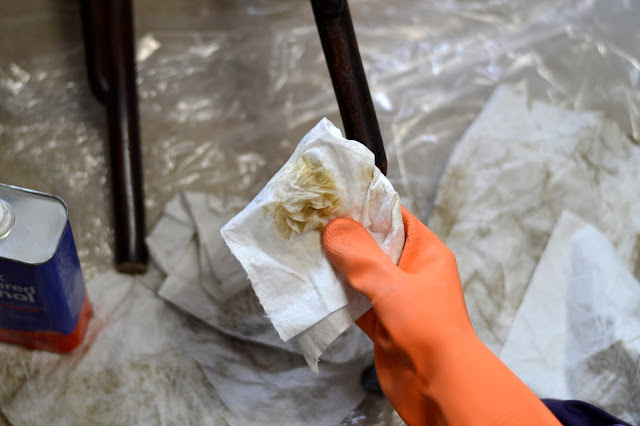 Then I took a short handled angle brush and brushed over the whole chair with a new coat of shellac, which was also left over from the antique theater seat project. The reason I wanted to give it a new coat was that I didn’t want any of the new paint seeping into the old wood. That way if anyone ever decides they don’t like the (admittedly very trendy) dipped look and wants to bring it back original, it will be easier for them to strip the paint without damaging the wood underneath.
The other reason shellac is great is that you can put almost anything over it and you can out it over almost anything. However, I was careful to select a water-based primer because premixed shellac has wax in it, which can cause bubbling of the final finish if you use an oil-based paint.
For adding the dipped look, I didn’t follow a very scientific process. For the “feet” I did measure: 4″ from the floor because the supports that come down from the bottom of the chair are actually uneven. Antiques, huh? 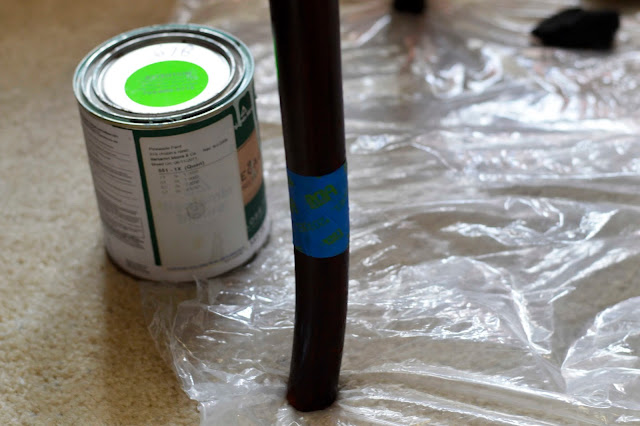 Anyway, I put painter’s tape at the 4″ mark, pressing firmly to get a nice, crisp line. 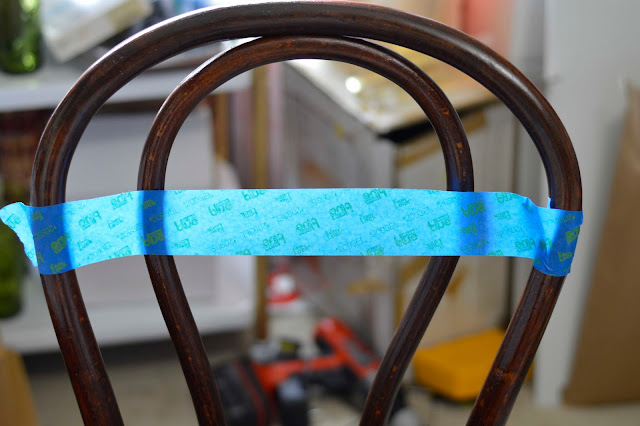 Then to tape off the top, I stretched a long piece of tape across the top where I though the bottom of the paint should go, cutting and wrapping the tape around each piece of the back as I went. 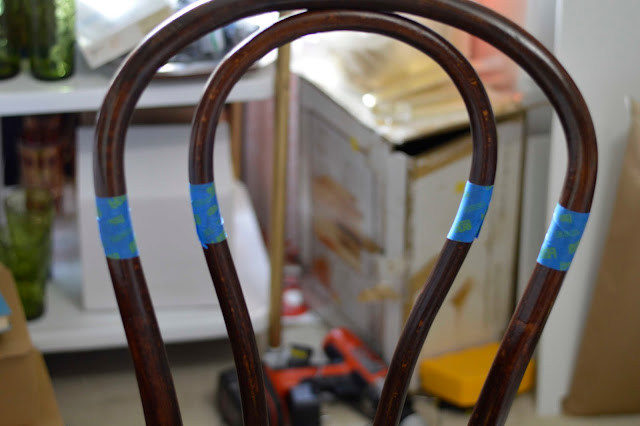 It mostly came out pretty straight, but it was a challenge because the round, angled pieces of the back made it difficult to wrap the tape to create a straight line. Perhaps if I had a laser level it might have been easier? 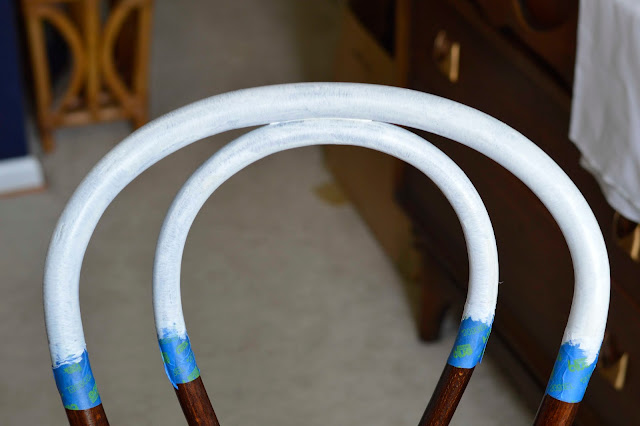 I finally had to buy more primer after about a year of using the quart I bought for the radio I turned into a bar. I went ahead and bought a gallon this time since I have at least two other painting projects on the immediate horizon! 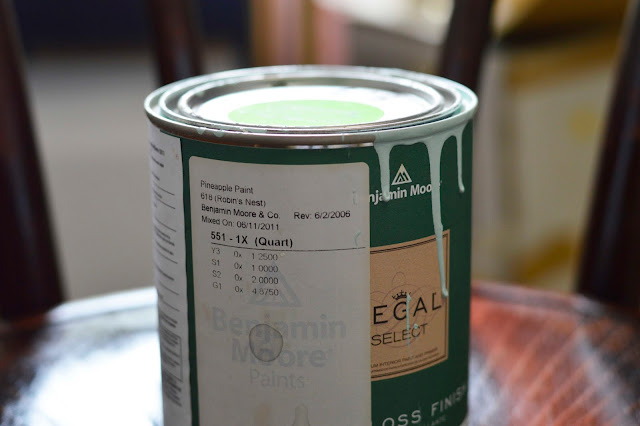 The paint color I used is the same one I used on the vintage faux bamboo shelves I painted, which wasn’t exactly color matched to another chair we have in the room, but it’s pretty close. It’s Robin’s Nest by Benjamin Moore in a their Regal Semi-Gloss finish, a pretty light blue-green. Normally I’d use Benjamin Moore Advance for a furniture painting project, but since I already had the right color in the Regal, that seemed a little wasteful. 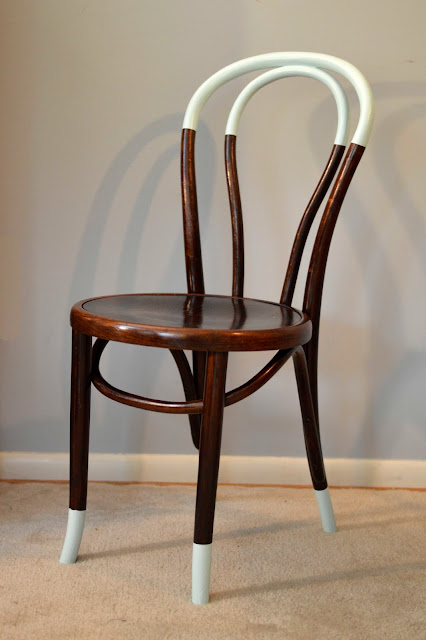 I’m quite pleased with how it turned out. I love the added pop of color and the new shellac makes a nice contrast to the matte dining table, which is finished with Danish Oil. 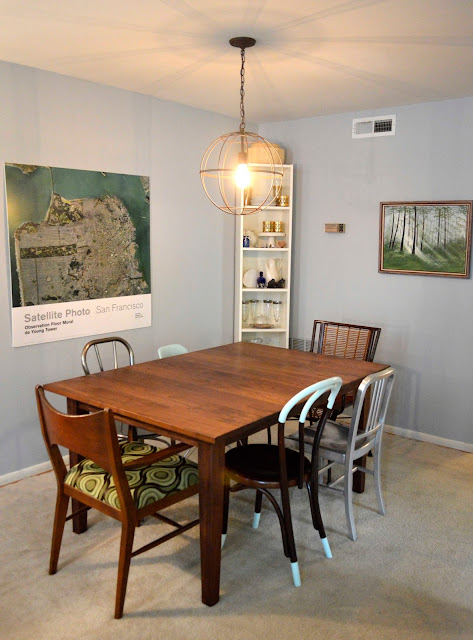 This dip dyed look been around since the spring, but this was my first attempt. I rather like the little pop of color it offers. And a $10 thrift store chair seemed like the perfect thing to experiment on. As for the cost of the project, I had everything I needed except for running out of primer, but since I only used about 1/100th of the gallon can I bought, that really only accounted for pennies. Not bad for a quick, cheap upgrade!
So do you like the trend? What are you itching to paint?
Linking up to: Making Home Base | Handy Man, Crafty Woman | New Nostalgia | Give Me the Goods Monday | The Shabby Nest | House of Hepworths | DIY Showoff | Uncommon Designs | If It’s Not Baroque | Liz Marie Blog | Blissfully Ever After | Design, Dining & Diapers | Crafty Scrappy Happy | Craftberry Bush | The Shabby Creek Cottage | Link Party Palooza | The Creative Connection | Serenity Now | Share Your Creativity | Dear Creatives | Simply Create
This is a post from Pies and Puggles. Republishing this article in full or in part is a violation of copyright law. And it isn’t nice. © 2010-2013, all rights reserved.

13 thoughts on “Before and After: DIY Dipped Bentwood Chair”