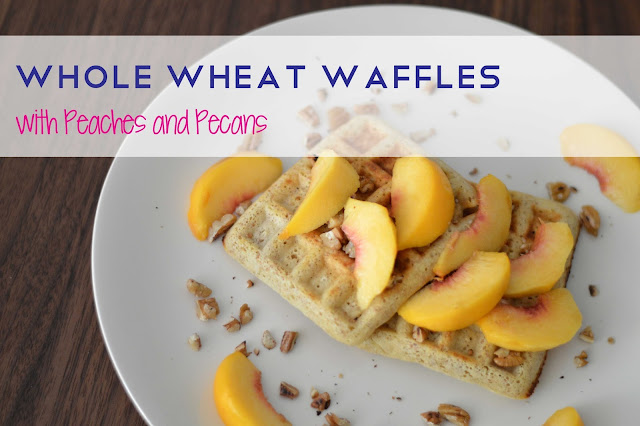 Do you have hungry days? Days when you wake up starving and know that you’ll want to eat all the chocolate by noon if you don’t have a substantial breakfast?

Well, obviously, I do. Most of the time in the morning, I have some whole wheat toast, cottage cheese or oatmeal. I’ve just never been much of a breakfast person. Except occasionally, especially when the weather turns cold and I’m running a lot, sometimes I just want a full breakfast in the morning.

Like yesterday. Earlier in the week, I was lamenting on Twitter that I didn’t think I would want one of my beloved Pumpkin Spice Lattes for another month at least. I mean, it was 90 degrees on Monday! Fast forward to the end of the week and it’s supposed to get down to 43 degrees tonight. 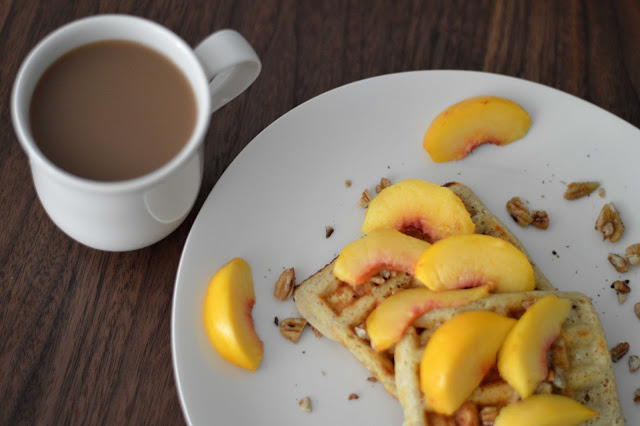 I don’t know where the decision to make whole wheat waffles came from. When I get in a mood like this, I usually look around the kitchen, see what’s available and whip something up. I knew I had farmer’s market pecans in the freezer and peaches that needed to be used on the counter. And that seemed a little too hearty for a fluffy white waffle.

But all the recipes for whole wheat waffles online had strange things in them like flax meal and wheat bran. I don’t object to those things, but it’s not like I keep them on hand for when I spontaneously want waffles. So I just subbed in half a cup of whole wheat pastry flour for half of the white flour in an America’s Test Kitchen recipe for waffles and off I went! 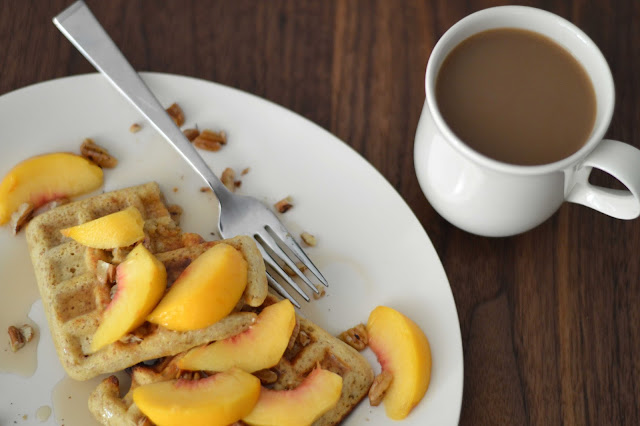 One note: this recipe is a bit fiddly, but with the addition of the whole wheat flour, which can make baked good heavy and gluey, I like the additional step of separating the eggs and whipping the egg whites. So don’t skip that part. 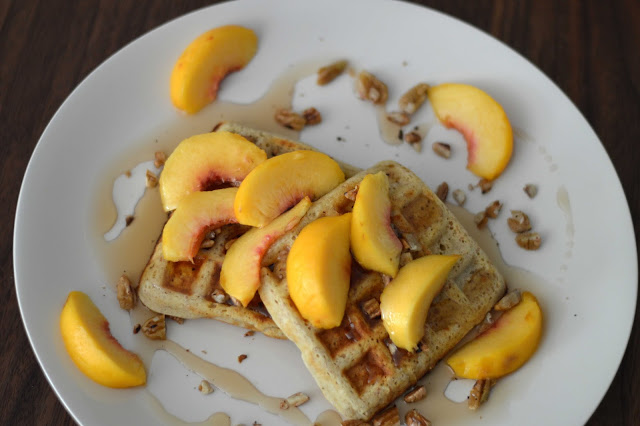 1. Heat the waffle iron according to the manufacturer’s instructions.

2. Meanwhile, whisk together the flours, salt and baking soda in a large bowl. In a separate bowl, whisk together the egg yolks, butter and then the buttermilk. Beat the egg whites and cream of tartar with an electric mixer on medium-high speed until stiff peaks form, about 2 minutes. Make a well in the center of the dry ingredients, pout the buttermilk mixture into the well and whisk very gently until the buttermilk mixture is just incorporated (a few lumps should remain). Toward the end of mixing, fold the whipped egg whites into the batter.

3. Following the manufacturer’s instructions, spread the appropriate amount of batter onto the waffle iron and cook until golden brown, about 3 1/2 minutes. Repeat with remaining batter, serving the waffles immediately or holding them in a 200-degree oven until all are cooked.

4. While waffles are cooking, toast the pecans on the stovetop in a small skillet. Watch them carefully! They go from toasted to brunt very quickly!

5. To serve, scatter pecans on top of the waffles, place sliced peaches on and around the waffles and top with maple syrup, if desired.

0 thoughts on “Whole Wheat Waffles with Peaches and Pecans”