Back in December, Doug and I took a trip to Staunton, Virginia, a town of 25,000 people in the heart of the Shenandoah Valley. It was probably our sixth or seventh visit there in the past three years. We really love it. At the prodding of a friend, I decided to go ahead and write a post about it. As of today, the post has over 5,000 views, making it my most popular post ever and bunches of comments with cool historical details and recommendations for places we’ve missed. So thanks Stauntonians, past and present. You made last week a fun week for me.
Staunton is not the only gem in the Shenandoah Valley though. There are plenty of cool places to go within about 45 minutes of Staunton and that isn’t even counting the wonder that is Charlottesville. We especially enjoy Lexington, which deserves a post of its own sometime in the future, and Harrisonburg, where we often stop on our way to or from Staunton. 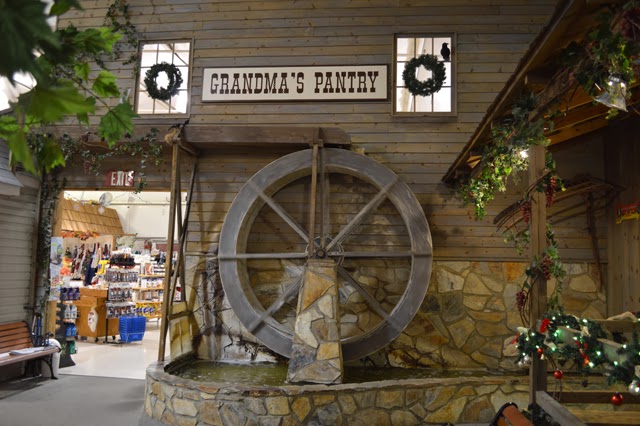 For anyone who has anxiety attacks whenever they have fewer than two pounds of unsalted butter or five pounds of all-purpose flour on hand, any trip to Staunton necessitates a stop at Grandma’s Pantry in Harrisonburg. I mean, I buy baking basics like flour and sugar at Wegmans like a normal person. But when it comes to more exotic ingredients like unusual extracts, black cocoa powder and vast quantities of expensive spices like saffron, this place is DA BOMB. There are things here that I can’t find anywhere in Fairfax County and the prices are often better than when I’ve found these ingredients online. 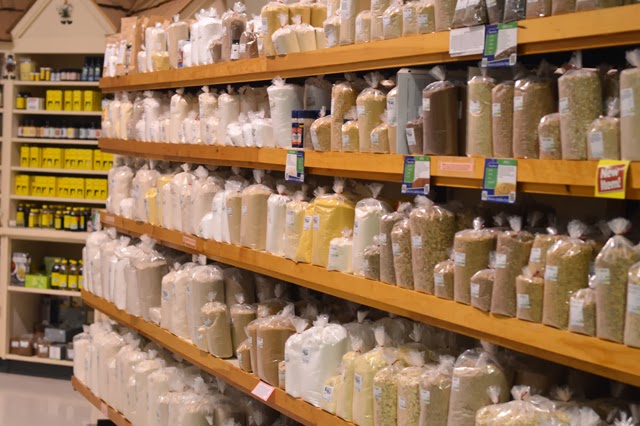 First, the selection is terrific. They have just about every kind of flour you can imagine. In fact, they do have every type of flour I have ever imagined and I can imagine a lot! Brown rice flour, almond flour, oat flour in both gluten free and normal versions, whole wheat pastry flour, cake flour, etc. My particular favorites in this section are the Japanese Panko breadcrumbs and the almond flour. The breadcrumbs here are $1.99 per pound as opposed to the Wegmans store brand, which is $1.99 for 10 ounces. Almond flour is also quite an expensive thing, which make experimenting with things like macarons and frangipane kinda scary. Here it costs about 25% less than at the grocery store. 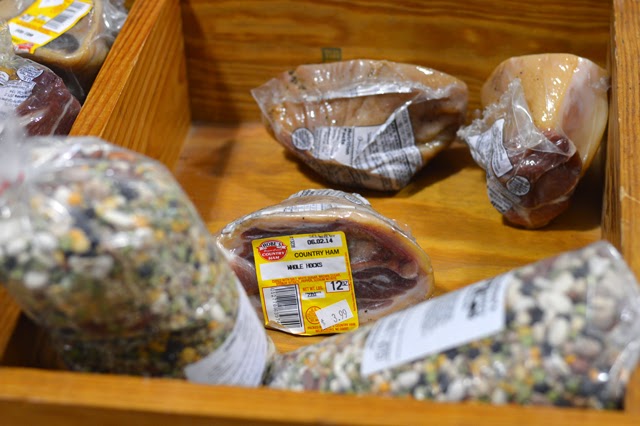 They also have country ham, which I can only find around DC sporadically, and even then usually in one of the Southern chains like Harris Teeter or Food Lion. New York-based Wegmans and California-based Safeway don’t carry it. It’s good for months so I stock up. 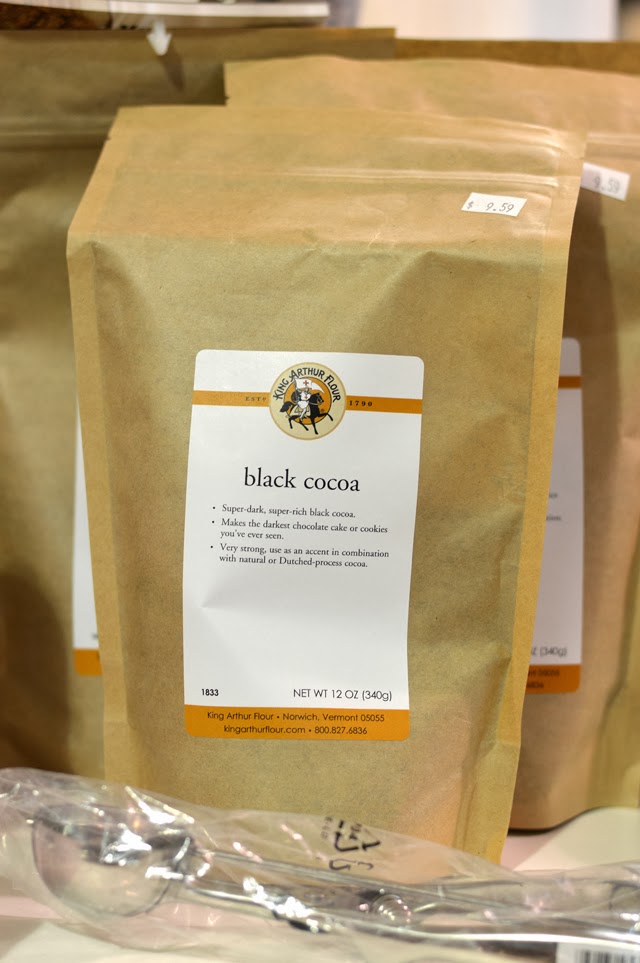 And a couple of months ago, a friend of mine was looking for black cocoa powder, which is known to be the best chocolate for producing homemade Oreos that taste most like the real thing. Even reaching out to some pretty serious professional and home bakers around town, I couldn’t find anywhere that carried it. And it’s one of those things that’s stupid expensive to ship unless you’re making a really big order. Now we know: Grandma’s Pantry.

The other thing I love to get here is powdered buttermilk. Buttermilk is one of those annoying ingredients. It’s used in a lot of baking and cooking and there’s a sort of adequate substitute (milk + lemon juice or vinegar) but that weirds me out. Chunks. Yuck. And you generally have to buy a quart even though I’m not sure I’ve ever seen a recipe that uses more than a cup. Which leads to rotting buttermilk in my fridge. With the powdered stuff, you add 4 tablespoons of powder to one cup of milk and let stand for five minutes. No grody chunks. No waste. So powdered buttermilk? Super sweet idea. I usually buy about 4 pounds of it, stick it in the freezer and it lasts me for a year. Running out of dry buttermilk is actually what prompted our last Staunton trip so it’s pretty important to me. 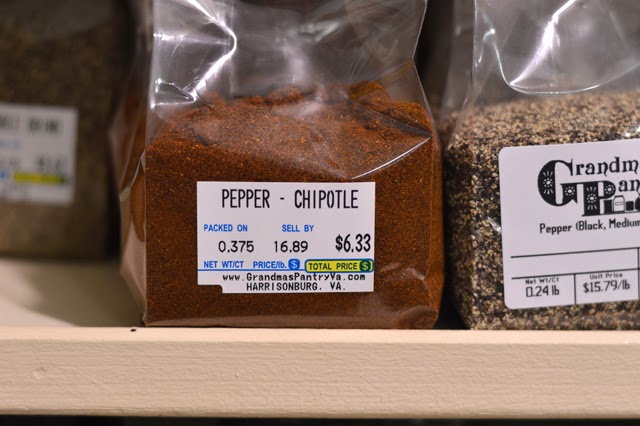 Then there are the prices. A 2 ounce jar of McCormick dried chipotle pepper is $6.69 at Wegmans. At Grandma’s Pantry, you get 6 ounces for just a little bit less. For that saffron, .06 ounces of McCormick’s will cost $16.89 at Wegmans. Here saffron is $2.99. I’m always hesitant to try new recipes with an expensive ingredient like saffron. Even if it’s not the world’s best saffron (and I’m not saying it’s not–I actually can’t tell), that’s a price that encourages experimentation. 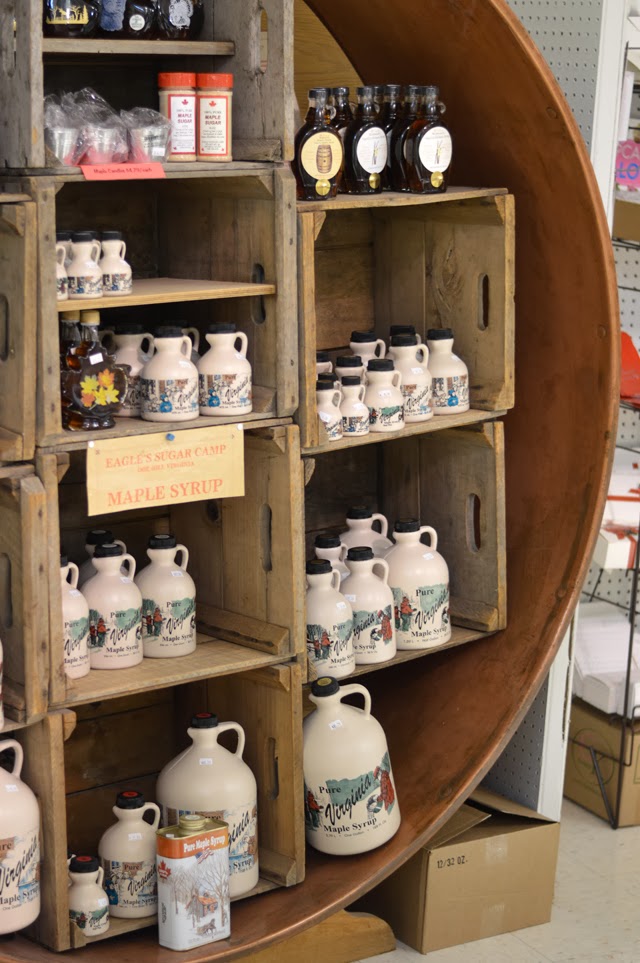 Finally, Grandma’s Pantry carries a lot of local Shenandoah Valley products. The maple syrup above is from Highland County, which has an annual Maple Festival. We went last year. It was super fun. We ate a lot of pancakes and maple sugar candy and maple donuts. My car smelled like maple syrup for a week. The festival is in early March. You should go. 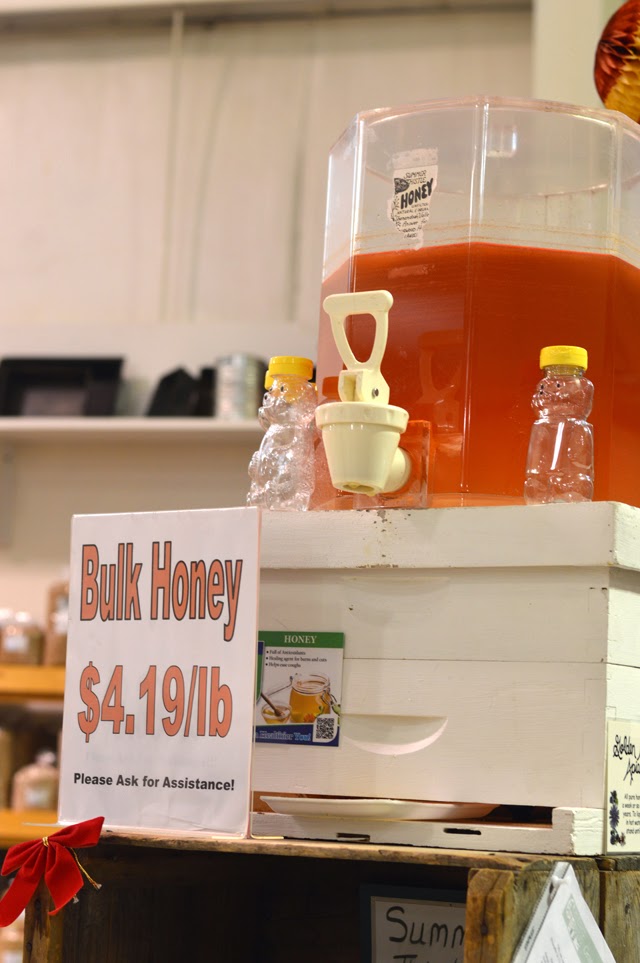 For some reason I didn’t get a picture of all the varietal honey, but the bulk honey is pretty fun too. There’s not a lot of cost savings here because the honey seems to come from mostly small producers, but if you’re looking for subtle flavor variations, they have an amazing selection. Like, a whole wall of different kinds of honey. 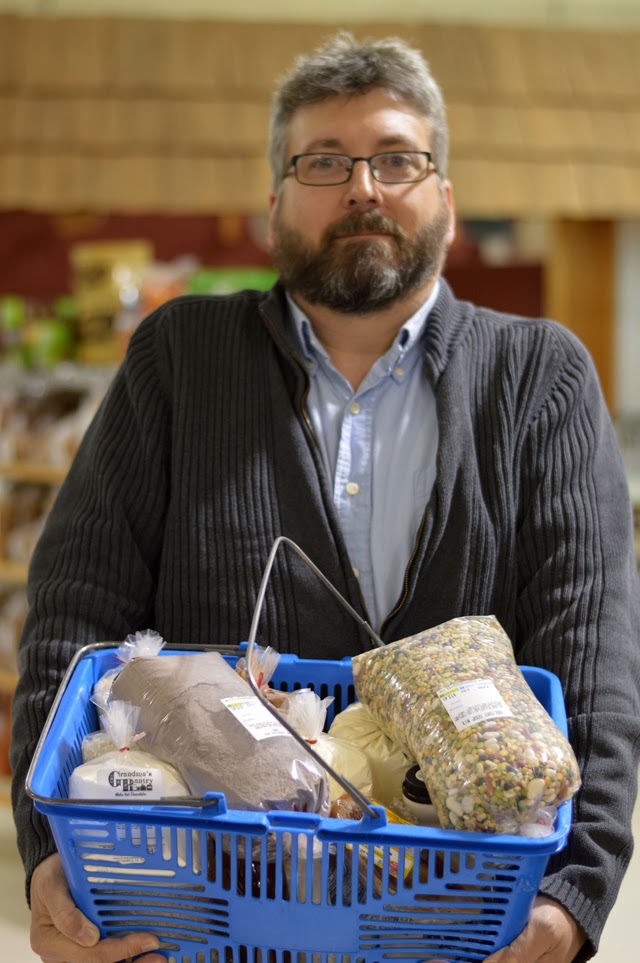 Since we only make it down there about once every six months, we really stock up. There’s about 20 pounds of groceries here in this basket, mainly winter staples like beans, country ham and hot cocoa mix and baking staples like dutch process cocoa powder (at half the cost of the grocery store) and dry buttermilk.

Grandma’s Pantry is located in larger warehouse-like building which also has some handmade furniture, antiques, a store that carries jams, jellies and other county-style canned goods, among others. If you’re lucky, you’ll catch a weekend when a group of locals is hanging out playing bluegrass music. It’s a little off the beaten track, but just plug the address into your GPS and you’ll be fine.

In other news, I’ve added a Travel header to the main navigation on the blog so if you’re interested in our little Virginia adventures, there are a couple more entries to look at. And stay tuned the week after Valentine’s Day for yet another day trip, this time to Purcellville!