When I started posting some of my old vintage stuff that I wasn’t as excited about any more back in August, I wasn’t really expecting my little store to take off the way it has. In three months, I’ve sold a lot of stuff, some of which was purpose-bought for the store. As in, I saw a great piece in a thrift store, didn’t have a use for it myself, but totally would keep it if I had room.

So now when I’m not baking dog treats, I’m often trolling local (or not so local thrift stores) looking for more great stuff to put in my Etsy shop. Doug approves since otherwise I probably wouldn’t leave the house. I’d just bake cupcakes. For no reason. Leaving us with an entire batch (or 3) of cupcakes to eat.

Anyway, sometimes these trips result in stuff that actually goes in the shop. Other times they result in a vintage Coach bag or a vintage tan trench coat for me.

Guess which it has been this week?

Though I did find a few things that will eventually make it to Etsy. 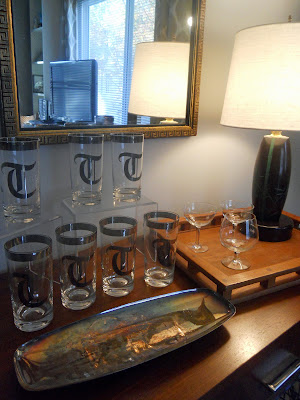 I’ve got an enormous bias toward housewares. First, my collecting personality leads me to things that are useful. Some people like ceramic animals. I like furniture and barware. It’s not good or bad, it just is. I’m the same with crafts. And since I can’t really collect much more furniture for our two-bedroom condo, I gravitate toward glass and metal barware. As a result, this is the stuff I know the most about so when I see it in stores, I immediately know what it is, what it’s worth and whether I would want to sell it or keep it. Other stuff, like vases and pottery and art, is tougher because I don’t know as much about it. And I stick to mid century stuff because that’s what I collect so that’s what I know. Lucky for me, Mad Men has also kept it pretty hot in the marketplace.

So let’s get to all this stuff.

You just don’t see a lot of modern silver. This happens to be silver plate and tarnished at that, but I’ll shine it up and in the shop it will go. I love surfboard shaped stainless trays and since they’ve sold very well on Etsy, I’ll keep looking for more. 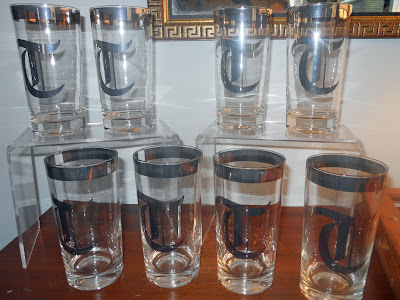 If not for Mister Modtomic, I would not have known what these are. Or, well, what they’re trying to be. Dorothy Thorpe made these silver rimmed single initial monogrammed glasses that have more of a cursive sort of script than these gothic letter ones and the rims are solid unbroken lines, not printed with a break on each side. But I figured it wouldn’t much matter to the monogram-crazy Pinterest crowd. And considering there was a guy hovering to see if I was going to buy them when I was looking at them in the store, I’d say these were a good buy. 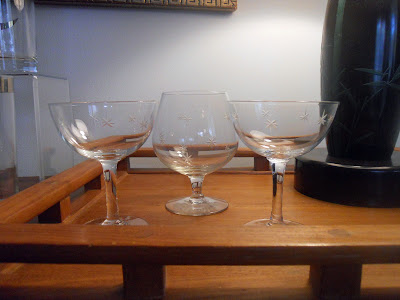 I really hadn’t intended to start another glassware collection (I already collect Culver Valencia), but it seems that’s what I’ve done. I bought a set of 10 cooler glasses in this pattern at a flea market a month or so ago and when these popped up in the same pattern at a thrift store yesterday, I figured I’d add to the set. What I’ll do with 10 coolers, 2 cocktail glasses and a snifter is beyond me though. Look for more, I guess.

And finally, see that teak serving tray they’re sitting on? I play this game with all the wood stuff in the thrift store. I pick up a teak piece like a bowl or a cheese board or a tray and flip it over. If it says made or designed in Denmark, I consider its form. Is it unique? I consider its condition. Is it beat up or covered in knife marks? If it is, how deep are they? Can I sand them out without wrecking the patina? If it says Made in the Philippines or Thailand or GoodWood, I put it back. If it says “Dansk” or particularly “Dansk IHQ” or “Dansk Torun”, I put it in my cart.

The back of this tray says Dansk IHQ, which is the mark of Jens Quistgaard, a designer for Dansk and several other 1960s era furniture and housewares companies. I luuurrrve him. And so do a lot of other people. I don’t need another tray, but it might be hard to let this one go.

Oh, and lest you think I forgot or had a repeat of Monday, no way!

And I forgot to have my husband take a picture when he got home last night so here’s a little Polyvore action describing what I had on yesterday.

And today? More thrifting! I finally got my Young House Love book last night so I’m off to the thrift store to see how many ugly mirrors, brass knick knacks and painted ceramic figurines I can find to spray paint. 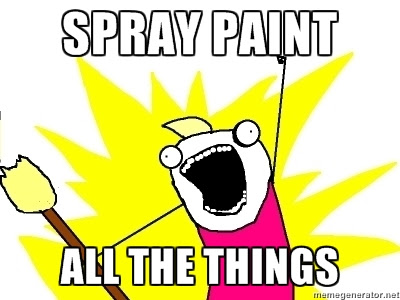