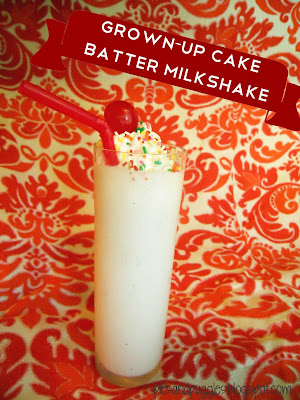 On Monday night, Doug and I went to a feast held at our local Turkish mosque to break the evening fast since it’s Ramadan. We’re Christian, but our pastor has befriended the local imam in the spirit of interfaith dialogue and so we were invited to observe evening prayers and enjoy a meal with them. We had a great time and met many interesting people. Everyone was really friendly and the Turkish food was amazing.

However, that’s only indirectly what led to this recipe. What led to these Grown-Up Cake Batter Milkshakes was the fact that the drive from our house to the mosque didn’t take as long as we thought it would so we stopped off at the local VABC store (that’s a liquor store for you non-Virginians) for some provisions. And while we were there, we noted that they were discontinuing something called Cupcake Vodka.

Given the profusion of flavored vodkas that have appeared in recent years, we were intrigued. Immediately I thought that making an alcoholic cupcake milkshake would be fun and Doug agreed. So for $10, we figured we’d take a chance. Of course, we got it home and discovered that it’s really just regular vodka. There’s no flavoring. But that’s okay, the inspiration had already been laid. 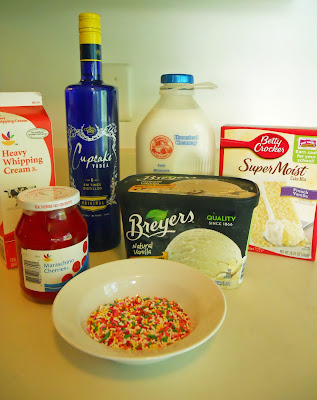 1. Combine cake mix and vodka in the blender on high speed for 30 seconds.
2. Add milk and ice cream and blend for 30 seconds.
3. Pour into two glasses, top with whipped cream, sprinkles and a cherry.