Here’s a project that none of you will probably ever have to do. Wait though! Don’t close your browser just yet. I have a point.

While I was in California last month, Chester decided to do some laundry and was a little rough with the junky plastic handle on the washing machine. 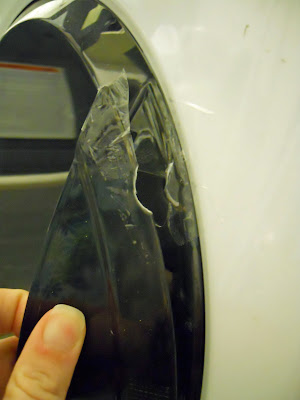 We’d been holding it together with packing tape, but that was clearly a temporary solution and a pretty bad one at that. You kind of had to push against the handle while you were pulling open the door. Awkward. 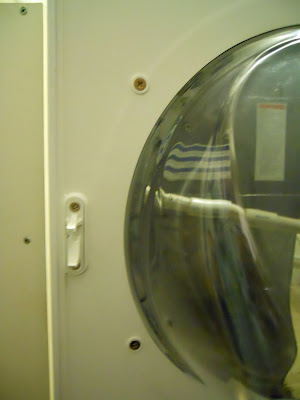 But when I opened up the door to see if I could take the handle off, it appeared that this was totally possible. See those two screws there? Seemed straight-forward enough. So I went online to GEapplianceparts.com and ordered the part. It was actually pretty easy. I just pulled the model number of our washer off the machine and used it to search the site. I even used RetailMeNot.com and got a coupon code for free shipping. So $81.62 later, the new plastic handle was winging its way to me.

I unscrewed the old broken handle from the door. Then I replaced it with the new handle and screwed it back together. The only thing that was difficult was making sure that I didn’t strip the very cheap, soft screws holding the handle onto the door. 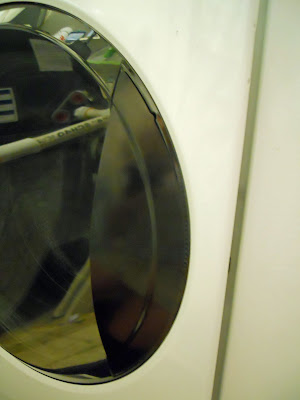 So here’s my point: it pays to be willing to jump right into something you’ve never done before. I suppose I could have called an appliance repairman and had him fix it. But then I would have had to pay a minimum $150 for the service call. Instead, I waited a week for the part and the whole process of changing it out took about 10 minutes including pictures. It’s taken me longer to write this post than it did to do the job.

That said, it also pays to know what won’t be easier and cheaper for you to do yourself. The other thing that happened this week is that our water heater stopped heating water. I mean, not totally. It was vaguely tepid. However, we’re not into tepid showers. We prefer hot ones.

So I called a contractor we know and he came out with the tools he needed, a hose and a couple of heating elements, drained the water heater, changed the elements and charged us $250. He also had to run out to the store mid-project because he needed some other kind of tool that he didn’t have and because initially he thought that only the top element might be bad, but then he discovered we needed the bottom one too. That was four hours and three trips to the store by a professional.

Can I just say I’m glad that wasn’t me? And doubly glad because this morning we had hot water and if I had tried to DIY it, we’d probably have had tepid showers through Sunday? Or longer. Plus, I would have needed tools. And a hose. And the parts, which cost about $40. And probably a whole lot of profanity and four calls to Doug’s dad while we attempted to bungle through it ourselves.

Job #2 requirements: knowledge of plumbing & electricity, a hose, specialized tools, the right parts & a willingness to chat pleasantly while I baked Nutella poptarts.

Yeah, I thought it was a no-brainer too.

Have you ever regretted a time when you tried to DIY? Or deeply not regretted it when you didn’t?

0 thoughts on “Let me see that can-do attitude”