Last week was kind of like National Lampoon’s Christmas Vacation: almost hilariously disastrous. Nothing burned down, but we did end up spending four days and $1,000 in car repairs (not including the car battery that died Saturday afternoon), dealing with an unrelated medical emergency and trying to support friends through varying degrees of emotional and physical trauma. Then there were the lesser complaints like my hair stylist not showing up for my appointment Friday morning and misreading a recipe that I thought would take an hour and a half, but really took more like three hours resulting a very late dinner Wednesday night.

So if you were expecting me to do something for you last week or hoping to hear from me, I’m sorry. That didn’t happen. But I’ve had some time to rest and regroup and I’ll do better this week, I promise. 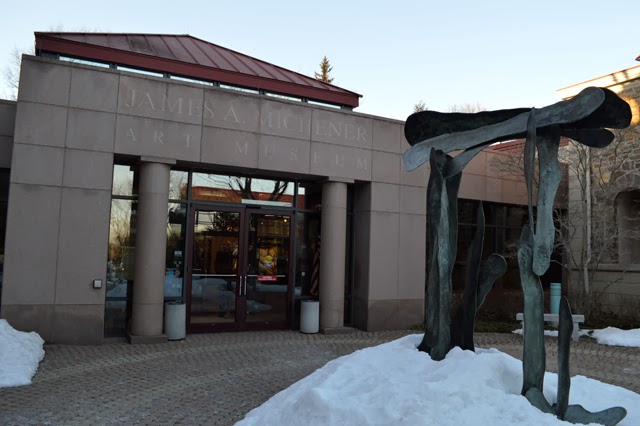 There was one highlight though, and what a highlight it was. Monday morning on our way to the first car mechanic of the week, David Rago of Rago Arts and Auction Center tweeted me to invite me up to Doylestown, Pennsylvania to come to the opening of the Paul Evans exhibition at the James A Michener Art Museum. I’d read about the exhibition in the New York Times Arts section and figured I’d make it up there eventually, but the invitation provided the perfect impetus.

So first: David Rago. Rago Arts and Auction Center is one of the sponsors of the exhibition and hugely important to mid century modern collectors on the East Coast. When I started studying early modern decorative arts in the pre-Mad Men era, the old Sollo Rago Modern Auctions catalogs I was able to obtain off eBay were invaluable, especially since most of the antiques trade publications and big price guides had the tendency to ignore Art Deco and mid century objects as not-quite-antique-enough. David is also an appraiser on Antiques Roadshow and we all know how I feel about that (spoiler: way cool). Remember, he was an off-screen feature of my Herman Kahler vase appraisal with Suzanne Perrault last summer.

Next, Paul Evans. We all know who that is, right? He was a designer and craftsman of mostly metal furniture with his most recognizable work appearing in the 1950s through the 1970s. His studio was in New Hope, Pennsylvania right near Doylestown, which was also the home of master woodworker George Nakashima (mark that bit; it’s relevant later). Paul Evans worked in a style this is now commonly referred to as “Brutalist”. Brutalism is actually an architectural style, popular in the same period that Evans was working, characterized by huge, largely concrete buildings with a modular appearance and often projected portions that seem to jut or leap into the viewer’s physical space. We have a number of excellent and much-reviled examples of Brutalist architecture in DC: the J. Edgar Hoover FBI Building and the no longer extant (as of last week) Third Church of Christ, Scientist, among others. Critics of the style tend to come up with witticisms like “socialist” and “ugly”. 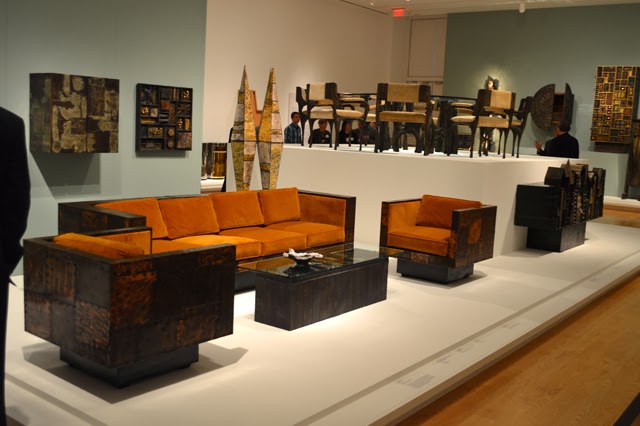 However, I’ve never thought the criticisms particularly fair. For one thing, the style has an active vitality to it and an organic quality that seems to refer to nature as it is rather than nature as we would wish it to be. By this I mean heartless, violent and implacable rather than romantic, pastoral and benign. I think the same can be said of Paul Evans’ work. Whereas most furniture celebrates restrained elegance, lavish comfort or strict practicality, the hard lines and jagged edges of an Evans piece aren’t minimalist, but they also aren’t displaying the same “beauty” of the ornamental styles of an earlier age. These are the moors of Yorkshire, not the gardens of Kent. 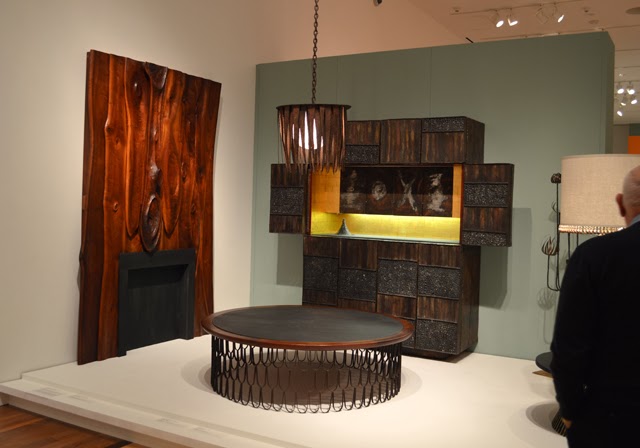 Okay, enough with the art history, let’s get back to the exhibition.

So I met up with David Rago, who promptly introduced me to Dorsey Reading. Reading was Evans’ primary fabricator, worked for Evans for 23 years and is now one of the foremost collectors of Evans’ work. He loaned many pieces to the exhibition and was full of stories about his days working for Evans, turning his drawings into furniture. He was the craftsman who built these monstrous hulking pieces and has the bad back to prove it. Reading now has his own successful custom building and renovation business. 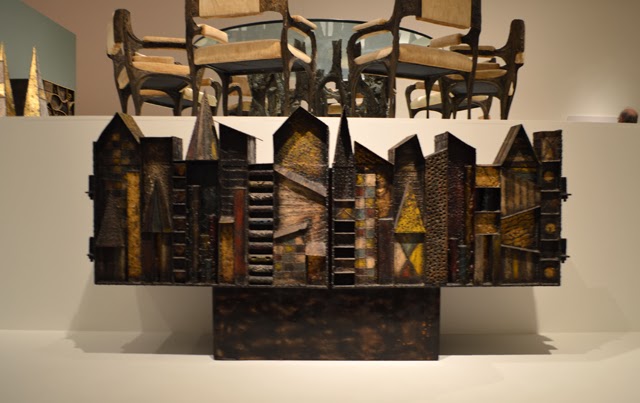 Next, casual as you please, David introduced me to Mira Nakashima, George Nakashima’s daughter and the heiress to her father’s legacy, both in terms of the furniture business he built and his talent and techniques as a woodworker. I must admit, I got a little tongue-tied when I was introduced. Actually, rather like a twelve-year-old girl meeting Justin Bieber. I’ve always thought it rather wonderful that she took over her father’s business and has become a master craftsperson in her own right. She is prodigiously talented and extraordinarily gracious.

So not only did I get to see some masterpieces of mid century modern furniture up close (including the piece that Dorsey Reading referred to as Evans’ best work), I got to meet some really interesting and talented people in David Rago, Dorsey Reading and Mira Nakashima. 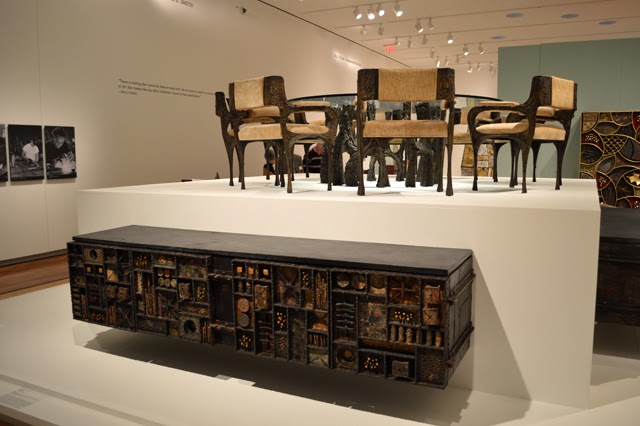 The exhibition itself is well worth the trip. It contains sixty-five pieces of Evans’ work and spans his entire career from art school in the early 1950s through to some fiberglass work he did late in the 1980s toward the end of his career. It’s the first comprehensive retrospective of his work and a must-see for any fan of Modernism.

Paul Evans: Crossing Boundaries and Crafting Modernism is open from March 1 through June 1 at the James A. Michener Art Museum in Doylestown, Pennsylvania.