A couple months ago I saw this quote on Pinterest:

“Tell the negative committee that meets inside your head to sit down and shut up.”
Since then, it’s become rather my rallying cry. Any time I get discouraged, feel like I’m not doing enough or have a set back, it’s easy to start listening to those little naysaying voices. Luckily, now I have something to say back: “SHUT UP, negative committee.”
In fact, I say this to myself so often (or Doug helps by saying it for me) that I figured I should print it out and stick it on my wall somewhere. And then I figured I could probably find something that someone had already done.
I looked on Etsy, but I only found a t-shirt, which really wasn’t what I was hoping for. So I thought that in theory I have some graphic design experience and in theory I could design it myself. The negative committee thought that sounded ambitious, but of course, I told it to shut up. 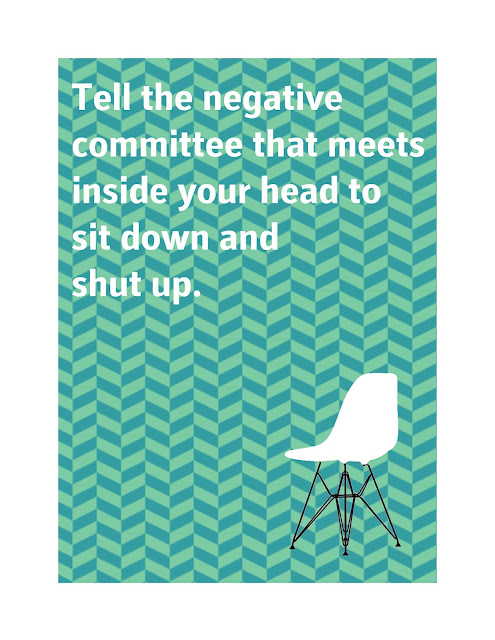 Here’s where I get to tell you about two very cool sites that I use from time to time. One is called Creative Market.  It’s a little like Etsy in that it has a community feel, but it’s for independent creatives who make digital things like themes and fonts. This is what they say about themselves:

Creative Market is a platform for handcrafted, mousemade design content from independent creatives around the world. We’re passionate about making beautiful design simple and accessible to everyone.

Well, it’s definitely simple and definitely accessible. Plus every week they send out a few free downloads of themes, fonts, even whole business branding packages via email. This is pretty much perfect for me, a totally amateur graphic designer. It enables me to download whatever looks fun and play around with it without having to sink a lot of money into expensive components like fonts and Photoshop brush packs and pattern packs. Even the paid products tend to be very reasonably priced.

To make the printable above, I used this herringbone pattern. I had to learn how to use patterns in Photoshop to do it, for which I used this super simple and wonderful tutorial. Then I downloaded a picture of an Eames chair (gotta give the negative committee an ultra-cool chair to sit in, right?) and sucked all the color out of the seat using the Magic Wand tool to select and the Paint Bucket tool to make it all white. The base was already black.

Finally, the quote itself is in Secca Std, from a website called My Fonts. This site is well-known to pro graphic design types, but for more casual users, it might be something new. My Fonts has pretty much any font you could ever want for any purpose. And a lot of them, like Secca Std, are available for demo purposes for free. Any type geek definitely needs to subscribe to their newsletter, which not only gives you a heads up on trends in font design, but also profiles some of the designers who make those fonts. It’s also pretty entertaining even if you’re not a complete font geek.

And though I designed this for myself, it seemed silly not to make it more widely available so here it is for you too as a free printable. I printed mine on regular printer paper and then trimmed it to fit a 7 3/4″ by 9 3/4″ Ribba frame from IKEA. 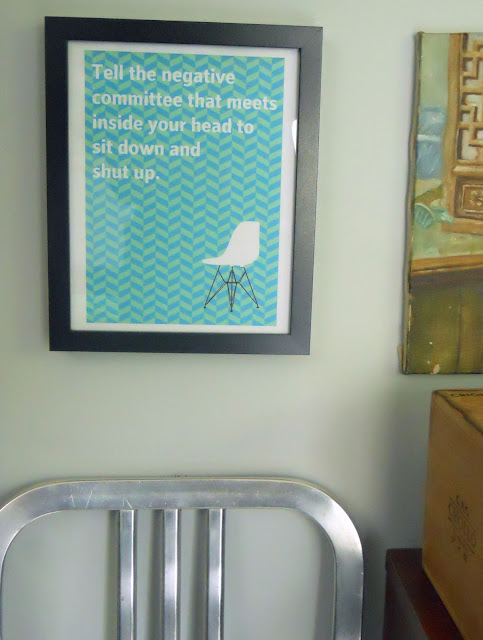 The negative committee didn’t like that my printer is apparently running out of ink and that I was out of photo paper, but I told it to shut up about that too.